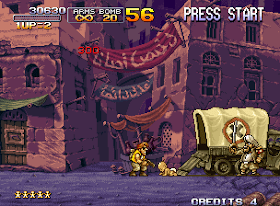 Several singles of the soundtrack were altered preserving the original music of each mission of the game. It was made to sound cleaner, sweeping and epic, just as in the other games in each mission there is only one music available on the entire stage.
Several missions suffer change of time. While in Metal Slug 2 a whole mission was day, etc., in this version the panorama changes.
The 1st mission is night instead of day.
The 2nd mission is day instead of night.
The 5th mission is dusk instead of day.
The scenario of the final boss has a different tone sky.
It is now possible to gain weight from mission 3, while in the other version, this was possible only in mission 4.
It takes less time to load than Metal Slug 2.
All levels contain growing and diverse enemies, as well as a different boss or boss in the first mission.
The types and locations of the vehicle are usually changed.
During the credits, a black background is replaced by a sample of design art taken from the Art Book of the game with the characters and bosses with the music of the end of the Metal Slug 1
As an easter egg, in some missions (specifically in the 4 and 5) you can see some ships of the aliens.
You can obtain hidden objects and prisoners that in Metal Slug 2 do not exist.
More enemies and obstacles compared to Metal Slug 2.
The game increased the level of difficulty in all missions, in the previous title some areas were facilitated (example Mission 6 in the area of ​​the movable bridge).
Character Fio Germi changed the cry after losing a life, in the previous title he shouted the same as Eri since he rode the same folder.
In Mummy transformation state in this title comes shooting faster. in the previous title it was very slow when firing in that transformed state, however throwing grenades becomes very slow like the previous title.
90% of its sounds, music animations and sprites of enemy characters and vehicles are recycled from Metal Slug 2 and 1.
In mission 3 The missiles that fire the enemies from the water aboard the Hovercraft are based on the real model Mc Donnell Douglas AGM 84 Harpoon anti-ship missile.
In mission 4 instead of the passenger aircraft that took off from the bottom of the Metal Slug 2 appears the ships of the Martians, the passenger plane is based on the Boeing 747-400 Jumbo and the Convair CV 990 Coronado.
After eliminating the last boss of the game the same ending appears as the Metal Slug 2 The end of the game is inspired by the end of the film Independance Day (1996), in which A Mc Donnell Douglas F / A 18C Hornet crashes against the alien ship, in the game an Eaca Type B makes the same scheme in which it crashes against the bottom of the alien ship.

The boxes were increased with the known weapons in Metal Slug and Metal Slug 2 but with a more powerful level, either in range, damage, etc. in the obese transformation they change their attack form, in the case of the Rocket Launcher it is the only one that does not present any physical change they become dirigibles like the Enemy Chaser taking slow trajectory.

A powerful weapon against armor, increases its power when the player gets fat (they turn into rocks)

It is a new weapon in this game. This weapon launches a kind of caninomorphic missile and crawls on the ground to explode in an enemy target. In fat mode, these missiles turn into yellow spheres with legs.

Small missiles similar to the "Rocket Launcher", but they differ in size and in that the first pursues the enemy. They also differ, since the Rocket Launcher is more powerful, although less precise. When you are obese, you acquire the power of a normal grenade. Clear example of this is the first segment of Mission 5 of Metal Slug 3, the same case in Metal Slug 5 Mission 2 and Metal Slug 6 Mission 4, when you are flying.

It has similar functions to the "armor piercing" (A.P.), so it can kill a large number of soldiers and aliens. As the name suggests, they are more powerful than ordinary grenades however it is one of the rarest weapons to get, it appears only in mission 5 in the subway area, in later titles it is found very rarely with less frequency, in its obese form, the grenades become larger and with greater power.

The drop shot is also a new weapon in this game. The weapon has like ammunition a species of explosive balls that when being fired they bounce. It is not very good for long-range attacks, in its obese form the explosive balls become large, its explosion is more important.