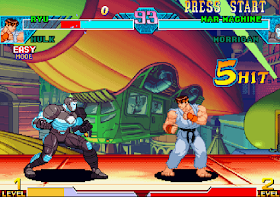 In general, the combat system is similar to the one used in the previous crossover. The game uses a six-button layout characteristic of arcade machines. The player chooses a team of two fighters who own a certain set of techniques.
At the same time, unlike MSH vs. SF, instead of unlimited ability to call the second fighter for support, the game introduced the possibility of calling for any third-party character that is randomly selected on a separate screen before the start of the fight. Such a character can be called on the battlefield a certain limited number of times to attack an opponent, while the player can in parallel with the assistant to attack. Also, with the help of a special code you can choose the character-helper yourself.

The available characters in total are 21 counting also the hidden characters.
Marvel:
Capcom: