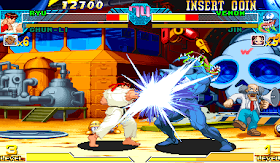 Genre: Action
Perspective: Side view
Visual: Fixed / Flip-screen
Gameplay: Fighting
Published by: Capcom Co.
Developed by: Capcom Co.
Released: 1998
Platforms: Arcade Machine, PlayStation (PSX, PS1)
In my opinion, the best (of the best) edition of the fights of the characters, because heroes from different parts of the world of Capcom gathered here, not only those who knew how to wave their fists great, but also everyone known: Mega Man, Captain Commando, Jin Saotome - "Cyberbots - Fullmetal Madness", Lou - "Three Wonders", Strider Hiryu. With regards to the game, you have the opportunity to choose a team of 2 any characters, plus everything at random, from a separate list, special assistants, which include: Arthur - "Ghosts'n Goblins", Devilotte Do Dethsatan IX ( aka Devilot) - "Cyberbots - Fullmetal Madness", Unknown Soldier - "Forgotten Worlds" and a bunch of others (as an additional special attack). The musical accompaniment simply amazes with its depth and expressiveness, it is very pleasant to listen. Visually, the game is at an altitude, the levels are very interesting, each is made specifically for a particular hero, with its inherent color. Complexity throughout the game is constantly growing. The dynamics of the game just killer (for fans to reflect there is a long known normal mode), all movements are clear and fast. In short, the game combines all the best of the past fighting games.
‹
›
Home
View web version