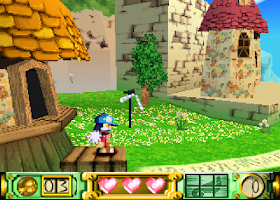 Genre: Action
Gameplay: Platform
Published by: Namco Hometek Inc.
Developed by: Namco Limited
Released: 1998
Platform: PlayStation (PSX, PS1)
This is the first game in the Klonoa series and the first game where he appears. The story begins with a legend about Phantomile, a mysterious land that feeds on people's dreams, and no one can remember his dream, even if he had just dreamed of it. However, one day a feline boy living in the city of Galbriz with his grandfather had a strange dream that a mysterious airship crashed into the nearest mountain and he can recall every detail of this dream.
And after a while it really happened - the ship crashed into the mountain on which the bell was standing, and Clonoa, along with his friend, the "spirit of the ring" named Hupey, decided to find out what had happened. After a battle with some small, round creatures called Muus, they reached the top of the mountain to see two strange people. One of them was a leader, and his name was Ghadius, and his companion was an ominously looking clown named Jock, and together they sought a talisman with magical powers. They kidnapped a woman named Lefis, and after returning to their village, Clonoa and Hopei decided to pursue them.

Klonoa Door To Phantomile combines standard platform elements with unique add-ons for that time. 3D backgrounds could be moved only in the specified direction, to the left or to the right. The player can shoot at enemies using a special weapon called "Bullet of the Wind." This weapon is a huge ring. When such a "bullet" hits the enemy, it inflates and is carried into the hands of Clonoa, and from that moment you can make many manipulations with the enemy, for example, throw it at another enemy, or make a double jump with it, to reach places to which you can not to jump off just like that. Clonoa can run, jump and solve various puzzles in order to advance through levels called "visions".
The development of Klonoa Door To Phantomile was directed by Hideo Yoshizawa, for whom it was the tenth project. The game originates from the concept developed by Yoshizawa. The concept had a serious history, focused on robots with the motif of the "ancient ruins". The idea was later discarded, and a more comical story was adopted. Yoshizawa was dissatisfied with the fact that most developers did not prioritize the story, and wanted to create a more cinematic game.
Ron Doolin from GameSpot gave Klonoa Door To Phantomile a rating of 9.2 / 10 and the "Editor's Choice" award. He criticized the problems with the prospect, when he had problems with determining the distance to moving platforms. Doolin encouraged the game design levels and opponents, and noted that the music is suitable for the game, but "sometimes annoying." His "only foreseeable problem" is the surreal art design of the game. He also said that there are "only two real problems" - the game "a bit too cute", and "a little short" - and finished, calling the game "one of the best side-scroller". The IGN columnist also gave Klonoa Door To Phantomile a "Editor's Choice" award and a rating of 8/10. The reviewer criticized the small number of levels in the game, as well as the excessive, in his opinion, the complexity of the bosses. IGN in the conclusion called the game "perhaps the best platformer on the market."
Four observers in the Electronic Gaming Monthly gave each game a rating of 9/10, and were awarded the "EGM Gold" award. The graphics and sound of the game were evaluated separately for 9/10, and its novelty and replayability were also evaluated separately by 8/10. Observers praised the game, calling it "fantastic" and "masterpiece platformer." One observer criticized the camera's perspective, saying that she sometimes obstructs the review, and another criticized the lack of complexity. They came to the conclusion that the best feature of the game is the "old school style of the game," and the worst is that "her childish sensation can scare the players away."
Clonoa received the "Best Character" award at the Tokyo Game Show in 1998. PSM editors, an independent magazine about PlayStation, put Klonoa Door To Phantomile in 19th place among the best games for the PlayStation in 1998.