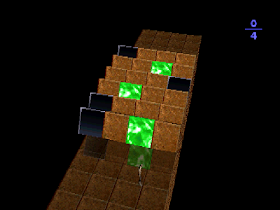 Genre: Action, Puzzle
Perspective: 3rd-person
Interface: Direct Control
Published by: Sony Computer Entertainment Inc.
Developed by: G-artists, Sugar & Rockets
Released: 1998
Platform: PlayStation (PSX, PS1)
A man called Elliot was trapped in an enemy trap, and multicolored blocks moved in rows. And there is only a pocket portable fuse and a bunch of dynamite. And the blocks will wipe it into powder if it does not have time to blow them up. He always has limited time, limited space - and an unlimited number of blocks that are approaching ... It will not be immediately possible to deal with this avalanche, it will be pretty hard to sweat and practice. And gradually the game draws. There are three types of blocks approaching you: "Single" blocks can easily blow up your little hero. You need to bring it to a certain square, press X (the square will light), wait until the block reaches this point and destroy it above the selected square. Press X again, and it will shatter to smithereens. "Black" blocks will be more difficult. They can be blown up. But if you manage to destroy all the other blocks without blasting black, you will receive bonus points and increase your bridgehead. And this extra space and time! The third, most recent kind of blocks is green. When you blast it, there is a green tile on the spot. Click Circle and you will destroy the tile and all the blocks in the 3x3 square! This description is necessary to understand the essence of the game, otherwise nothing is clear. And it's easy to imagine why this game has become so popular in Japan and why more than 500,000 discs have been sold!
The name of the game challenges the player (IQ - "Coefficient of intellectual development"). In this Action / Puzzle you have to play for the characters who are on a floating platform with rows of blocks of different colors should destroy them, but without touching the blocks of black color, as their destruction leads to the destruction of part of the platform and you will have less room for maneuver, which in truth, very little. If the platform is completely destroyed - you lost.
There are different versions of the game, but many tactical schemes are simply doomed to failure. You will, for example, destroy one block, paving your way, never break through the second level. After all, then you will have to burst the rows of green blocks, and with them and precious black! But it is desirable to save them! As you gain experience, you will learn to "cut through" your path through avalanches of blocks, master winning tactics. Yes, and learn to move your fingers! There are eight levels in the game, each of which has a constantly increasing picture. Moreover, there are five more levels of complexity, each of which increases the speed of the game. At the highest level, the blocks move almost continuously, and you need to be very quick to carry your feet. You can compete in the mode of two players. If you manage to break through, and the opponent "dies", then it's clear who won. And in single player mode, you can record your IQ according to the results of the game. And let the friends-rivals equal to you.
Interesting: Many people think that the idea of IQ was revolutionary for the PlayStation platform, forgetting that there was once a 3D project called Gridders, the essence of which was very similar to the ideas of IQ.