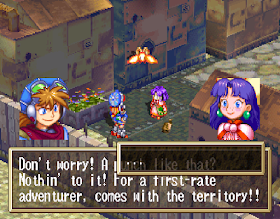 Before swap CD, save state to file, next CD, upload save state file.
Genre: Role-Playing (RPG)
Perspective: Top-down
Art: Anime / Manga
Pacing: Turn-based
Setting: Fantasy
Published by: Sony Computer Entertainment America
Developed by: Game Arts Co.
Released: 1999
Platform: PlayStation (PSX, PS1)
When Game Arts released the game Grandia, this game immediately became a classic example of role-playing game. Now that SCEA has transferred this game to the PlayStation platform, the fans of role-playing games should celebrate the new holiday. Grandia, a game that has gone on two discs around the world, represents the story of a boy named Justin, who, along with his cousin Sue, falls into an exciting series of events and adventures. The game is focused primarily on the storyline and the development of the characters. The whole game is built in completely 3D polygonal worlds. Much attention is paid to small graphic details. In the game, everything from textures to stone pavements is thought through, to your opportunities to interact with the smallest details surrounding you. It seems that the plans of the creators of the game included such a plot line, in which no stone will not remain unturned and no cup - not broken. These innovations and attention to detail are also worked out in the scenes of battles. You will need to learn a whole system of magical spells, the power of each of which will increase with time and every time you use this spell. Thus, you will be able to raise not only your level of the warrior, but also your magician level. The style of combat also varies, depending on how far you are from a particular opponent at the time of the start of the fight. At each skill level, you will have the maximum number of steps you can change. The battles are very realistic in terms of space and time. SCEA and Game Arts claim that the game uses about 200 different weapons, about 200 things that can be collected and about 200 different monsters that have to be fought. The audio track remained unchanged.
Japanese role-playing game in the style of anime - we immediately imagine a world where demons and wizards co-exist with unimaginable mechanisms, labs and villages run around pretty teenagers (or adults resembling adolescents), designed to save the world. But the developers of the game Gandia, Game Arts argue that their creation is much superior to the generally recognized hit. Firstly, the creators of Grandia abandoned the long and space-consuming anime cutscene. I hope you will agree that in the role-playing game the main thing is the atmosphere of the created world, and so in Game Arts they decided to achieve it with the help of unique music. A huge number of excellent themes and a few specially written songs, it's really impressive. Graphics, too, is not forgotten. In Final Fantasy VII 3D were only characters, in the game Grandia volumetric everything. You can choose the camera position, and when searching for useful items, you may have to bypass the desired object several times. True, on the most beautiful, and, therefore, the most saturated landscapes the game slows down a bit. The plot is incomparably less cruel, compared to the known RPG of this type. You not so much decide the fate of the world, how many wander in colorful areas, talk with others (with some, to get information, it is worth talking more than once) and find out the details of the biography of your heroes. The main one is Justin's boyfriend, he is accompanied by comrades Sue and Fina. In total there can be four people in the team, but the companions come and go; following not your desire, but the course of the plot. The battles are different from Final Fantasy VII by having a strategy element: you need not only to choose the types of attacks, but also count the action points in order to have time to run up to the enemy, or dodge his impact. After the victory, not only the general experience of the team grows, but also the specific skills used in the duel (for example, possession of a sword or a certain type of magic). Of course, the destiny of the world will also have to be puzzled. General Baal (as resembles the name of the Phoenician deity) dreams of overcoming the impenetrable wall and getting into the witch half of the world, the capital of the demons Arento, Maybe he should be detained? The game is somewhat longer than Final Fantasy VII, but the fans of video games decide how much better.
‹
›
Home
View web version