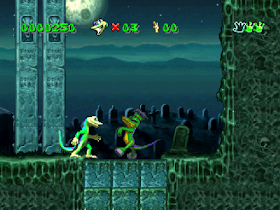 Genre: Action
Perspective: Side view
Gameplay: Platform
Visual: 2D scrolling
Published by: Crystal Dynamics
Developed by: Crystal Dynamics
Released: 1995
Platforms: PlayStation (PSX, PS1), 3DO Interactive Multiplayer
It seemed that nothing new could be invented in this genre, especially after the famous game Super Mario World, released by Nintendo. However, Gex beat Super Mario World immediately by two parameters. First, there are a lot of new inventive ways of moving the main character. A wonderful tailed creature with suckers on its feet can climb any fences, walk on the ceiling and jump on any platform that is in its field of vision. It would seem nothing special, but in combination with other innovations, the game goes completely different. Secondly, the game "has matured." Platform games, in fact, were still intended for children: all these ornate worlds with a lot of wonders carried away only young people, who did not see anything in life (how can this be said?). Well, in extreme cases, teenagers - if the hero wore battered jeans and a hairstyle with a tail. Gex should also like adults.
Gex is a lizard, more precisely - a gecko. Geckos can run, jump, dub the enemies with their tail, catch flies with a long tongue and run around walls and ceiling with small suckers. However, Hex himself is not too fond of catching flies and running around the walls. Why? He, that is a sin to hide, a little lazy, and spends all his free time in front of the TV.
In sitting in front of the TV for such a young lizard there is no use, so it's no wonder that with our hero there was a terrible thing. The insidious and evil Rez, Lord of Virtual Measurement, decided to get himself a new talisman for luck. We do not know why he would have decided that it was lizards who brought happiness, but one day, when Gex watched his favorite cartoons, it happened. Retz reached for our lizard from that side of the screen, grabbed it and dragged it into its hellish TV jungle. The only way to return from there is to explore the Virtual Dimension and collect all the remote controls. If you use them to turn off all the TVs, then Gex will be saved.
‹
›
Home
View web version