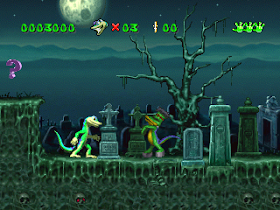 Genre: Action
Perspective: Side view
Visual: 2D scrolling
Gameplay: Platform
Published by: Crystal Dynamics
Developed by: Crystal Dynamics
Released: 1995
Platforms: 3DO Interactive Multiplayer, PlayStation (PSX, PS1)
From a certain period (that is, after the arrival, so to say, of the cult and moustached man of Mario from Nintendo) for me, it became apparent that almost all platformers on all sorts of different prefixes from other manufacturers went on the way of borrowing characters from the earthly, or even unearthly fauna. Well, what was it? Hedgehog Sonic, dolphin Ecco, worm Jim, and then worse, down to Crash Bandicoott. Duck here it so happened that the 3DO Interactive Multiplayer also had its own "mascot", which, incidentally, did not bring happiness to her, and even for a certain period continued to exist, becoming a sort of defector.
Precisely I remember that Gex was the number one game for 3DO in general, and for FZ-10 in particular, at least because it was a kind of free bonus. That is, I bought a prefix, got a game. It's clear that this scheme served only to the huge popularity of the project, although without it, it had all the chances for this popularity.
For example, the story certainly helped. It was terribly simple. Such a modern gecko, sat at home and quietly watched TV, while the evil and terrible boss of all the bosses (called Rez), conceived the evil, and more simply the abduction and still embodied his idea in life. So Gex has to go through about six really unique locations (The Cemetery, New Toonland, Jungle Isle, Kung FuviL1e, Rezopolis) and more than twenty levels before you have a chance with the boss to get even and return home to the family and TV.
The game is really very good. Not only is the main character voiced by the comedian Dana Gould (and his voice is almost impossible to confuse with something), the duck also has levels and dynamics and the style itself, very, very funny. Since Gex essentially travels inside the TV world, each of the locations is a parody, to a sort of set of television stereotypes. Only one drunk Superman of what it costs, and such an outrage there is literally everywhere.
In fact, the locations in the game are not five, but six, but the sixth (and one of the most complex) as is found secret. On the Internet there is a whole FAQ about how to get to this very location (which is called by the way Planet X) and that there actually can get up, and you can get up a lot including playing mini-games, and even as a bonus (at the end of the game ) view a set of sketches, pictures and photos.
I certainly have a special relationship with Gex. This game was and remains my favorite platformer, although if you think, you had to see more beautiful and original things on all the same consoles of the fifth generation. But in Gex, some unique combination, such a successful set of components for creating a philosopher's stone or a kind of key to the player's heart, has been chosen exactly.

How to destroy bosses

When you run through the cemetery, escaping from the ghouls pursuing you in white clothes, try to knock off a few skulls from the boss, and only then directly attack him.

The victory over Fartman requires the study of his habits. To protect yourself from this boss's attacks, just jump up, but listen carefully: just before he strikes, a characteristic sound is heard. Hold on the middle of the screen, and after the fourth attack, move to the right and duck. When he attacks again, climb up to the ceiling and kick with the tail on the anvils at such moments that the anvils would fall directly on the boss of Fartman. Ten blows should finish him off.

To win at this great level, vertically spinning up. You just need to get to the top of it. Most jumps can be done from the spot, but some will require a take-off to complete. Use also the ability of Hex to stick to the wall in some places. All jumps must be done very carefully, because you are moving a huge snake, emerging from the holes. If you constantly move, then all the time will be ahead of her. If you had to stop even for a moment, before you continue the movement, be sure to wait for the snake to appear, so that it did not happen that you jumped straight at it.

Climb almost to the top of the right wall and hit the boss-reptile with your tail whenever you can get it. Then go down and run to the left, and when the poisonous turtle begins to descend, run to the right. Again, jump onto the wall and, dodging the boss's weapon, repeat all over again. The secret of victory is in the synchronism of your movements. Catch the rhythm of the tortoise's actions and follow it.

Dodge Reza's attacks and find the fly fluttering to the right. When Res goes to his console to drop the exploding TVs, climb up the wall and jump from the TV to the TV until you can jump onto the right wall. Flap the tail with your tail and choose a language. Now that you have a good aim, you can spit it in Reza's boss. Do not forget to dodge the flame that erupts at the same time. Before you defeat him, you will have to hit a beetle five times, repeating these actions every time.

To reach this secret level. You have to go through all the prize levels (like, for example, the level Skull / Frankie in the graveyard - Graveyard) with the maximum result. At the level of Rezopolis it is enough to collect 27 barrels. When you have passed all these levels, a new control panel will appear, completely dark. It accumulates in small parts your ability to pass to the planet X. The current level after this can not go through. You can not keep this part of the ability at this stage, and if you lose your life, this accumulation will be lost. You should accumulate in parts the ability to go to planet X, and use it on the worlds selection screen.

How to get to the bonus stages

Wrappers for passage to the prize level can be found at any level, except for those on which the bosses are located. Most passages to the prize levels are near the Polaroid cameras, which allow you to save the game and in case of failure repeat your path from the saved Moment. Below are some of the prize levels.

In the middle of this level, find the camera "Polaroid". On the left you will see a depression between two plates. Climb the walls, to the right there will be a moving platform. Jump on it and stay there until you find the surface of the fixed platform on top, on which there is a wrapper for passage to the prize level.

In the beginning, just go to the right until you find the first blue signal flares. There should be a question mark next to them. If you go down the wall near the rockets, then at the bottom you will find a wrapper.

At the very end you will see a sumo wrestler. On the left, almost outside the screen, is a platform. To get there and take the prize wrap, you must make a superelastic jump. Focus on the eye, which at the time of the jump must be in the extreme right position.

Advance to the right until you find the first camera "Polaroid". On the right you will see a wooden bridge, a little disassembled in one place. Go down this hole and go left. The wrapper is hidden under the ground from the side where you came from.

First, find the cameras "Polaroid". Near one of them you will see helium balls, with which you can jump up. To the right of the balls is a few flies. Jump up, sticking to the left wall above the spikes, and then climb up. There you will find a wrapper.

How to pass the bonus stages

Stump throws out skulls. So that you can defeat the monsters of Frankenstein, you need to break these skulls with your tail. Jump when you see the stump clenching before throwing out the blacks, and hit it. Then wait until the second skull hits the top of the screen, and hit again. Repeat these steps ten times. The main thing here is to take the right rhythm.

You will be followed up the mine, collecting flies. To rise, press on the rubber bottom, and you will be thrown. Jump seven times in the right shaft, then, collecting flies, fall to the left, and jump there. Collect all the flies in the central block, and then fall down to get the fly on the right. Now, climbing in the usual way on a solid wall, go back, and jump to the left until you get to the next block. Jump to the right side, collect flies there and continue to jump, waiting for the block that will go down to the left. On it you must find the last two flies.

Here the flies will fall by themselves. It is necessary to collect all (thirty of them) and do it as quickly as possible, having run the whole island. Do not be late; it is enough just to touch the flies, without using either the tail or the tongue.

At this level, you enter a room in which there are so many platforms and flies. We must collect all the flies. Save time. Everything is done so that you can finish your journey where you started. To run without stopping, hold one of the "Shift" keys constantly pressed.

Be careful here: the conveyor sheds barrels on your head and at the same time seeks to drag you off the screen. You have to break the kegs with your tail and run along the conveyor simultaneously. As soon as you disappear from the screen, the passage of the prize level immediately ceases. Until then, you need to collect at least 27 barrels. The best way is to bend down in the middle and break the barrels falling in front of you and behind you, not trying to run after those barrels that you do not get.