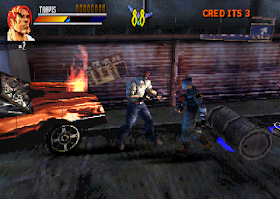 Genre: Action
Perspective: 3rd-person
Gameplay: Beat 'em up / Brawler
Published by: Interplay Entertainment Corp.
Developed by: Na.p.s. Team s.n.c.
Released: 2000
Platform: PlayStation (PSX, PS1)
The game takes place in the not so distant future in the super-modern city of Tokyo. Year 2011. Pegasus Corporation has developed an amazing computer program that was supposed to destroy all kinds of viruses. However, it somehow deteriorated and began to function according to completely different laws and was so modernized that it mutated into an anthropoid form. The consequences of the incident are difficult to assess, as a result of this a fantastic demon Akujin, who kidnapped the young girl Angela, and the whole of Tokyo literally turned into a nightmare hell. In order to cope with the situation and curb the diabolical forces created by the same scientists, the united government sends a powerful team, which includes experts in the field of martial arts, the most outstanding hackers and technology experts. They must find the kidnapped girl, destroy the devil Akujin with his minions, and thereby restore peace and tranquility to Tokyo.
The squad includes Travis, Michelle, Tetsuo, Ushi, which in the process of the game attract two such powerful fighters as Gorilla and Kobuchi. The four main characters go in different ways to the final victory, meet different bosses, enemies, move completely different routes and, in fact, each character plays his own game, giving you great opportunities for choice and variety.
In the game Gekido: Urban Fighters only nine game characters. Some of them, as you know, have to be reached. To make the most effective use of them, you need to know how, when and in what situations it is best to use this or that character, and what combat techniques and abilities will be useful in this or that situation.
Obviously, the creators of Gekido were inspired by such games as Final Fight and Streets Of Rage. The main character is made in the cartoon style, which gives the game a distinct cinematic flavor. Caricature characters, a crazy story line and endless hordes of bad guys, everything is here, and everything is brought to the extreme. The creators knew that they wanted to make a game that would expand the boundaries of the genre, so they took everything, including the martial arts system, and brought it to the limit. Speaking about the system of martial arts, it should be noted that this is one of the most intricate systems in its genre. Each character has a large arsenal of related combinations of punches and kicks, and in the process of playing, they are even able to learn more - tricks, special "furious" movements, throws - they are all here and in full. As in real life, you can use in the fight that comes into your hand objects. Boxes, wrenches, flaming barrels - all this can be an effective weapon. In many ways, Gekido is a very cinematic game. The camera effectively focuses on the action, the plans are enlarged to show special movements at a better angle. The environment in which fights are held has the quality of a movie, and it always seems that something is happening in the background. People pass by, planes fly overhead, cars rush through the streets. You get the impression that you are making your way through the real world, made in the style of animation. Even enemies do not just appear, but descend from helicopters or on the run jump out of cars. Thanks to a well-engineered movement mechanism, sometimes eight characters can be seen on the screen at the same time. Dramaturgic explosions and remarkable lighting effects add to the atmosphere of the movie and the feeling of the game.
Ten different characters play in the game (six of them are hidden until a certain time), and the action takes place in six different modes (History, Arena, Spy, Team struggle, Survival and Street gang war). The History Mode is the main lure of the game, but the other five will appeal to players and will increase interest in the re-play. In the battle in the arena, you can compete with three real or computer opponents, and find out who of you is really the king in the ring. And in Survival mode, you can experience your stamina and skill in a fight with an endless sequence of opponents.
Skip level: During the game, hold down the Start + Select buttons in the Urban Fighters Mode.
‹
›
Home
View web version