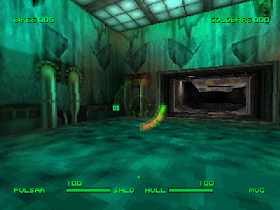 Genre: Action, FPS
Perspective: 1st-person
Gameplay: Shooter
Interface: Direct Control
Setting: Sci-Fi / Futuristic
Published by: Acclaim Entertainment
Developed by: Probe Entertainment Ltd.
Released: 1998
Platform: PlayStation (PSX, PS1)
The earth was damaged as a result of another unsuccessful scientific experiment. The planet's population has been almost completely destroyed, only a handful of people who call themselves Garbage collectors have remained, but in fact looters, who need to stuff their pockets with gold. Forsaken direct heir is a very popular, if not revolutionary, series of games Descent. You fly along superbly executed underground tunnels on anti-gravity Puoncycles and fight either for gold, whether for life, or even for one and the other at the same time. The design of the mazes was done by three independent companies (each designed in four levels) and it must be said that they look amazing, the game has amazing polygonal graphics, great light and transparent effects, every detail of the environment looks clear, it seems the frequency of the picture is not less than 60 fps.
You can move in any of the 3 dimensions, unfold 360 degrees, slide, accelerate. All this implies difficult management, as it is, for a beginner Forsaken will seem a difficult game, but this is only the first time, after a while you will understand that everything is very well thought out and every button of the controller is in its place. At your disposal are several Puoncycles (they look like flying bikes), they are different in appearance and technical characteristics (maneuverability, speed, armor). In the game at least 25 different weapons, it is scattered in labyrinths or remains from a defeated competitor, but how beautifully executed shots and explosions! In addition to your opponents, labyrinths are crammed with security systems, and the terrain itself makes you very neat. Forsaken is really a gorgeous, extraordinarily beautiful game, with a powerful drive-music that fits the gameplay very well, plus there is a Death Match mode in the split screen mode and you know, hunting is very fun!
‹
›
Home
View web version