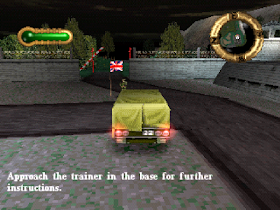 Genre: Strategy / Tactics
Perspective: Top-down
Pacing: Real-Time
Setting: Sci-Fi / Futuristic
Published by: GT Interactive Software Europe Ltd.
Developed by: Pixelogic Limited
Released: 1999
Platform: PlayStation (PSX, PS1)
Science fiction has repeatedly discussed the war with aliens who intend to capture our Earth, invading it from the vast expanses of the galaxy. These battles have repeatedly appeared on the screens of game consoles, but neither Babylon 5, nor Star Wars, nor Battlestar Galactica probably were and will never be as popular as the first work of the great English science fiction writer Herbert Wales, who described the Martians' invasion of Earth so realistically in their novel "War of the Worlds." This novel was published many times in our country, it was the basis for numerous movies and even musicals. In fact, it is the musical that is the basis of the game made for the PlayStation.
At the end of the XIX century, truly historical events occurred, when the Martians landed in Britain, deciding to settle here forever. It is clear that your task is to show to cosmic monsters who is the master on this planet and to kick these fugitives from their native Britain as quickly as possible. However, in history, not everything is so glorious and simple. Dealing with these guys is very difficult, because the Martians far ahead of the earthlings in the development of their technology, as well as intellectual capabilities that allow them to work on the minds of other humanoids. However, mankind has always been famous for its ingenuity and ability to wriggle out of any, almost hopeless positions. Aliens are almost invincible at the very beginning of the game, but gradually you will adapt to fight them and, in the end, put uninvited guests on your knees.
The new version of War of the Worlds has great graphics, aggressive Martians, impressive explosions and a wonderful soundtrack. Steeply welded game action consists of a sequence of missions in which you need to achieve success, no matter whether you defend your base or knock out the spirit of their Martian invaders. The game is sustained in the genre Real Time Strategy, with the amendment to the console version.