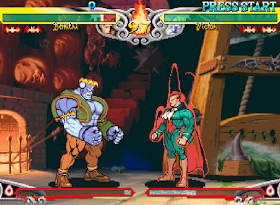 Genre: Action
Perspective: Side view
Gameplay: Arcade, Fighting, Martial Arts
Narrative: Horror
Published by: Capcom Entertainment
Developed by: Capcom Co.
Released: 1998
Platform: PlayStation (PSX, PS1)
When the sun sets and humanity retreats into the security of its shelter, Jedah - the Vampire Lord summoned from the darkness eighteen legendary warriors, heroes of myths and legends, to continue the struggle for power over the darkness, and possibly the whole world. This is the third part in a series of games-fights from the company Capcom. In terms of the image of the game has not undergone significant changes, however, the developers improved the animation of the characters, added more characters and deepened the storyline of the game. You can play for many characters, among them: Jedah, B.B. Hood, Q-Bee, Lilith, Demitri, Morrigan, Anakaris, Victor, L. Raptor, Hsien-Ko, J. Talbain, Felicia, Rikuo, Sasquatch, Bishamon, Donovan, Pyron and Huitzil. The characters of the game are very unusual, for example; Q-Bee is a giant queen of bees, very sweet, but dangerous, because at a difficult moment can cause its hairy, biting and poisonous on the battlefield. B.B. Hood - a funny parody of the Red Riding Hood, which struggles to hold a basket of pies, but at a critical moment takes out the ultrasound from under the floor and in "stuffing the opponent". Each character of the game has the Dark Force, this force only acts a few moments, but produces huge destruction. In total there are 18 characters in the game, many of them are heroes of the previous fighting games of the series.
The game offers five game modes - Training mode will allow you to bring your character to perfection, Versus mode allows you to choose the game stage, handicap and its status. Skirmishes are one-on-one with your friend. The third mode is a gift to the fans of the series, the Visual Story Mode gallery (Collection Mode) where you can view various beautiful art pictures of characters, places, sketches in high quality. By the way, the gallery can be viewed on a regular PC. The Original Character mode allows you to create and perfect your favorite fighter, you just need to choose a name, its color / color, and fight for it for your own pleasure. Become a master - you will create fighters of incredible power. The last mode is the Mode of History, or Arcade Mode, where you consistently beat other fighters.