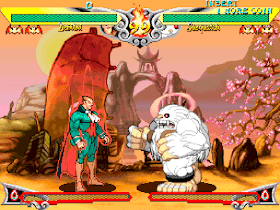 Genre: Action
Perspective: Side view
Gameplay: Arcade, Fighting
Narrative: Horror, Martial arts
Published by: Capcom Co.
Developed by: Capcom Co.
Released: 1997
Platforms: Arcade Machine, PlayStation (PSX, PS1)
This game served as a visual model for the creation of Vampire Hunter 2: Darkstalkers Revenge, and they do not differ much in the number of characters, except that 3 were replaced and there is more than 1 here - this is the "vampire lord" himself - Jedah. The name itself suggests that it will be about saving vampires, when, as in Vampire Hunter, it was quite the opposite, and the characters are appropriate, only our heroes have nothing to do with it, because this will be done at the expense of their own souls, and therefore a new battle of otherworldly forces. The battles here take place literally in one breath, namely, their division into a round is practically not noticeable, unless you look at 2 icons under the level of lives. A variety of techniques is enough and there are no particular difficulties in their use.
‹
›
Home
View web version