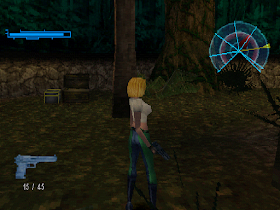 Genre: Action
Perspective: Behind view
Gameplay: Quick Time Events (QTEs)
Published by: THQ Inc.
Developed by: n-Space
Released: 2000
Platform: PlayStation (PSX, PS1)
Danger Girl is a video game based on the comic book of the same name, where a team of sexy agents try to frustrate the plans of the treacherous Major Maxim, his crazy girlfriend and the fascist Hammer empire. Maxim is building plans for changing human DNA to create invincible soldiers, understandably with the goal of establishing a dictatorship. Defamer confront the leader of the team Abbey Chase, Australian Sydney Savage and the recently adopted in the team beauty JC ("Jaycee"). All three are considered top-class professionals. In the game, they have to run, jump, shoot, neutralize and install explosive devices, save hostages or turn off alarms, penetrate into the terrorists' den, ie. full spy set. The game is done in about the same spirit, from the same developers and it looks like the same engine as the game Duke Nukem: Time To Kill.