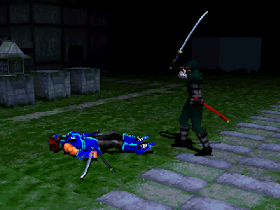 Genre: Action
Perspective: 1st-person, Side view
Gameplay: Fighting, Martial Arts
Published by: Square Electronic Arts L.L.C.
Developed by: LightWeight Co.
Released: 1998
Platform: PlayStation (PSX, PS1)
The general concept of the first Bushido Blade is a fight where there is no graphic representation of the life of the characters, and the characters can be killed with just one professionally struck blow. The same situation was preserved in the second part of the game. Nevertheless, the methods of attack and defense have been changed and made more elegant and refined. There are only two attack buttons, "Circle" and "X". They will play the role of "Normal Attack" and "Reverse Wrist Attack" respectively. Combining the use of the direction of movement with the buttons of the blows, you get various variations of attacks. The game still provides a choice of weapons, only its number has decreased. The movements of the characters in this game are much better. Such, for example, movements, like carpal movements when swinging the sword, are made more realistic. Also, when you engage with swords, it usually wins the one who was in the best position.
In the first part of the Bushido Blade, the main story was based on the "Kade", a clan of hired assassins. At this time, the real enemies will be open - they are a group of opponents who were secret in the first part of the game. Shainto, the "bad" clan, fights against Narugami Shintoryu, the clan of "good" warriors. The battle between the two clans was the basis of this game. You must join one of the two groups to select the character that will represent you, and then destroy all members of the opposing group.
In the previous version, the weight and size of the characters were the determining factors for choosing the weapons that they can use. In this version, everything is left unchanged. In addition to this, you can now use two types of weapons at one time. For example, if you use two swords at the same time, you can greatly improve your fighting power, but this will make your strokes and movements slower. There was another new method of fencing skill, called "Lai". Using this method, you always keep the sword in the scabbard. This art of fighting is good enough, though, considering that you can take the sword out of the scabbard with one quick enough deadly movement, like a wind blowing.
‹
›
Home
View web version