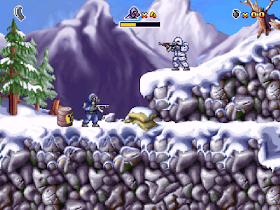 Genre: Action
Perspective: Side view
Gameplay: Platform, Shooter
Vehicular: Helicopter
Published by: Bigben Interactive GmbH
Developed by: Light & Shadow Production
Released: 2003
Platform: PlayStation (PSX, PS1)
CT Special Forces is a classic scrolling shooter very similar to the Metal Slug series. This is the first of three CT games for the PlayStation and players should thank the developers that they have released such a quality game for the retired Playstation (the year of release 2002, the production of games for the original platform was practically discontinued). In CT Special Forces, the player controls the Counter Terrorist (CT) agent in four locations: snow-capped mountains, deserts, jungles and city streets. Developers have diversified the game with different missions and battlefield perspectives: more often it's a classic side-view shooter that we love so much, but in some missions you control a helicopter like a Strike series or destroy terrorists like targets on a dash like the Point Blank series. Our special troops have solid weapons, ranging from a rifle with endless ammunition, to a flamethrower, grenades and mines. There are also first aid kits to restore health. There are in the game and special equipment like a grappling hook, and even handcuffs for the arrest of criminals (usually a level boss). Do not forget the developers and the joint passage of the game, so that everyone will be happy.
‹
›
Home
View web version