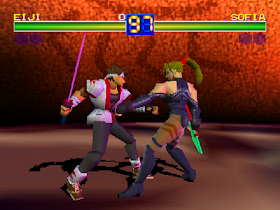 Genre: Action
Perspective: 3rd-person
Gameplay: Fighting
Art: Anime / Manga
Published by: Sony Computer Entertainment of America
Developed by: Tamsoft Corporation
Released: 1995
Platform: PlayStation (PSX, PS1)
The fighting game Battle Arena Toshinden for the PlayStation system was one of the first for the console. Then it was a real sensation! Beautiful graphics and soundtracks, stunning special effects, numerous techniques of fighting - all this made a strong impression on gamers. But as it usually happens, with all its entertainment, Batttle Arena Toshinden did not become the game that chases the inveterate players for a long time, in addition, the more successful and even more spectacular fighting game from Namco - Tekken for a long time stood out as the leader of the genre, and now, later many years, every gamer will tremble with a small tremor at the mention of the brand name from Namco, while Toshinden is buried in time, not only the first part, but the whole series. Edition "100% PlayStation.
Interestingly: Battle Arena Toshinden (Special Disc), or to be more precise - just Toshinden, published only in Japan. It came complete with a book about the game. On this disk there is no human mode against the computer and only two modes are available: the person against the person and the computer against the computer. Instead of the usual pictures of the choice of characters as in other games of this series, here you can say caricatures of them, painted with colors. But in general this is the usual first part.
‹
›
Home
View web version