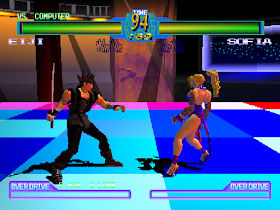 Genre: Action
Perspective: Side view
Gameplay: Fighting, Martial Arts
Visual: 2D scrolling
Interface: Direct Control
Setting: Fantasy
Published by: TAKARA Co.
Developed by: Tamsoft Corporation
Released: 1996
Platform: PlayStation (PSX, PS1)
At the very beginning of the era of 32-bit video games, there was a game-fight Battle Arena Toshinden for the PlayStation system. Then it was a real sensation! Incredible graphics and soundtracks, wonderful special effects, incomprehensible methods of fighting - all this made the impression of a bomb exploding. But, as often happens, for all its spectacularity Battle Arena Toshinden did not become the game that captures inveterate players for a long time. And now there was the Battle Arena Toshinden 2. It is unlikely that now someone will argue that this is the best that he has ever seen. But still the game is substantially rebuilt and improved. A new "?" Block appeared on the new character selection screen. If you highlight it, then the question mark will start running at a high speed on all the characters, so that you will choose at random. In addition, then to the chosen fighters will be added those secret characters to which you will get during the game; to select them, it is better to press the Select button, and then the speed of the running cursor will decrease.
The most attractive in the Battle Arena Toshinden 2 is, of course, graphics. Here, progress in comparison with the original version is particularly noticeable. Especially admire the effects of lighting. For example, in some scenes, light sources constantly rotate around fighters; On the floor, picturesque shadows are rushing ..., but this greatly prevents you from concentrating on the game action. During the battle, you can choose one of four different observation points (foreshortening): normal (side), because of your fighter's head, from a distance or at an angle. However, except for the opportunity to admire the beauty of graphics, special benefits from the variety of angles can not be extracted.
In general, experts assess the Battle Arena Toshinden 2 very restrained. Noting the excellent graphics, highlighting the excellent animation (smooth though not very natural character movements), pleasant music, especially in the introductory episode, and high-quality sound and noise design, they quite unanimously note the bad logic of the game action, the presence of strange (albeit spectacular ) the methods of fighting and the monotony of the flow of the game, discouraging the desire to play it for a long time.
‹
›
Home
View web version