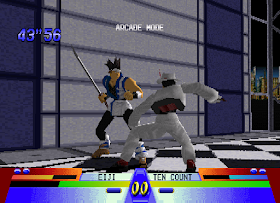 Genre: Action
Perspective: Side view
Gameplay: Fighting, Martial Arts
Art: Anime / Manga
Visual: 2D scrolling
Setting: Fantasy
Published by: Playmates Interactive Entertainment
Developed by: Tamsoft Corporation
Released: 1996
Platform: PlayStation (PSX, PS1)
After the battles in Toshinden tournaments, the Secret Society was destroyed, but underground competitions played a role and when the fighters return to everyday life, many enemies will meet them on their way. This is the main content of the Battle Arena Toshinden 3. The original was, in fact, the first game with a truly 3D graphics, and its loud success greatly contributed to the popularity of the PlayStation platform. In the Battle Arena Toshinden 2, new characters appeared, but the changes were cosmetic. But the Battle Arena Toshinden 3 has revolutionized! Now in the game 30 (!) Characters, a completely new story, new arenas, brilliant polygonal graphics, organic and realistic animation, a huge set of special techniques and a gambling battle storyline.

To open secret fighters (bosses), you must win one game in Time Trial Mode of all rivals.

Now that you are controlling Sub-Bosses, set the difficulty level to Hard. Win in Time Trial Mode, playing for Sub-Boss-a and not losing a single fight.

Now, playing for Sho, you need in Time Trial Mode at the difficulty level Impossible not to lose a single fight.

Now Abel is at your service, and with him you need to achieve victory in Time Trial Mode at Impossible difficulty level. And do not lose a single fight!

Win, playing for every ordinary fighter. Each victory will give a hidden "double" of your character. When all twins are at your service, win a game with one of them, and then defeat each character you can choose.