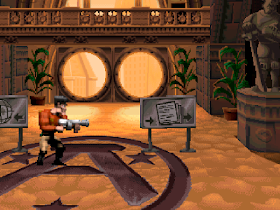 Genre: Action
Perspective: Side view
Gameplay: Shooter
Published by: Virgin Interactive Entertainment
Developed by: King of the Jungle Ltd.
Released: 1997
Platform: PlayStation (PSX, PS1)
According to unstable data under the signature of the "Moon Conspiracy," in July 1969, Neil Alden Armstrong made the first tour of the Moon for modern mankind. Under the vigilant gaze of his homeland "break away" pioneers failed. Look into the lunar craters strictly forbidden, and giant leaps in a different force of gravity were recognized as dangerous to the health of the state, since trained astronauts, crazed with happiness, could gallop to loss of consciousness and board up to some zatykannogo alien bar. And the country is not yet ready to justify the activity of Zone 51 and to give the recipe for the preparation of the Corellian whiskey of the brand "The Vyrrhenian seasoned" without having had time to "weld" on selling the franchise. But comrade Armstrong in this story held a "family" nobility and calmly returned home. As evidenced by historical chronicles, many individuals from the genus of the Armstrongs were distinguished by ambiguous achievements: the lunar scam (Neil Armstrong), the invention of the regenerative and super-regenerative types of radio receivers (Edwin Armstrong), the sevenfold lead in the overall ranking of the bicycle races Tour de France 1999-2005 (Lance Armstrong), a tremendous impact on the development and distribution of jazz music (Louis Armstrong) ...
Unfortunately, even in the World Wide Web of reliable information about the activities of yet another, extremely extraordinary Armstrong - well, just a cat cried. The only place where you can get information about a man who alone has been saved by an unsuspecting world while others have been making music is the video game Agent Armstrong. The product was developed on the basis of carefully hiding details of the events of 1935, when a criminal syndicate tried to establish a world order, using all available military potential of that time, plus armament ahead of the era, specially designed for the Day of Invasion. And, as it happens in the notorious film-makers, the situation is taken to save him, the most brave and most successful spark in the fountain of his kind, who alone managed to scorch a villainous ass, upsetting the insolent intention of another dictatorship to sit on the head of an unfortunate mankind.
‹
›
Home
View web version