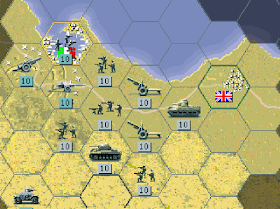 Genre: Strategy / Tactics
Pacing: Turn-based
Gameplay: Wargame
Setting: Historical Events, World War II
Narrative: War
Published by: Xing Entertainment
Developed by: Halestorm, Strategic Simulations
Released: 1997
Platform: PlayStation (PSX, PS1)
Like Panzer General, the game is dedicated to World War II. You can play both for the countries of the anti-Hitler coalition (both the campaign and individual scenarios), and for the Axis countries (only individual scenarios).
In general, the structure of maps, the types and characteristics of troops, the goals of battles, the accumulation and consumption of resources (prestige) are similar to Panzer General, but there are some differences. So, the interface is implemented in the style of the Windows window interface, it is impossible to form new troops in the captured cities in the process of fulfilling the mission and so on.
In addition, unlike Panzer General, the campaign can be held for the Soviet Union (the first mission - the Soviet-Finnish war of 1939-1940, the last one - the capture of Berlin in 1945), or for the armed forces of Great Britain and the USA (the North African campaign or the Italian campaign - a hypothetical capture of Berlin by Allied forces).
It is worth noting that each side (Soviet or Anglo-American) is fighting only its types of weapons, nowhere is it in contact with each other (for example, there is no meeting on the Elbe in principle), the supply of military equipment by lend-lease is also not reflected.
Also missing is the Pacific Theater of Military Operations.
‹
›
Home
View web version