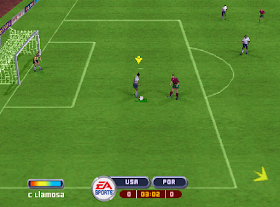 Genre: Sports
Perspective: Bird's-eye view
Setting: Asia
Interface: Direct Control, Multiple Units / Characters Control
Sports: Football (European) / Soccer
Published by: Electronic Arts
Developed by: Electronic Arts Canada, Software Creations Ltd.
Released: 2002
Platform: PlayStation (PSX, PS1)
Almost all fans of football simulators are arguing over the same question, which games are better: FIFA or International Super Star Soccer (ISS). Literally from the appearance of these games, a certain competition broke out between them, which has no precedent in the game world. Some consider FIFA better, because there are a lot of players, teams, equipment, brilliant commentary, and ISS differs much more sophisticated and diverse technical techniques, excellent animation and even game action, although the comments are much worse.
Let's see how it all began when the game FIFA 96 appeared in 1995. It was not a very impressive start, because the game did not convey the spirit of football. She was some kind of marmalade, chocolate and, in general, even a cartoon in a sense. She could not attract real football fans. The next version - FIFA 97 is small, than it was different from its predecessor, although, of course, the animation became much better, it became possible to make fairly accurate programs and the commentary improved. However, serious and fundamental changes did not happen, as in the games FIFA 98 Road, then the World Cup, although usually for the championship of the company develop very powerful games. In general, it was sad to look at all this, especially since the next game World Cup 98 disappointed even more. It, in essence, in the nature of the game action was no different from the previous two, not only obsolete, but not very high-quality versions. Virtually the owners of PlayStation, fans of football imitators, were simply robbed.
But when the game FIFA 99 came out, it became clear that the developers on the right track, as it turned out to be the best game in the FIFA series. Excellent animation, graphics, comments, an excellent selection of players and teams, the choice of a variety of tactics and strategies, accurate transmission. In general, everything that should be in a real football simulator. Unfortunately, the games FIFA 2000 and FIFA 2001 have not made any further progress in the game. They essentially parasitized on FIFA 99. It became clear that it was necessary to create either a fundamentally new game project or to end with this series.
Yes, by the way, in the new game you will have 16 football leagues: the English Premier League, the Spanish Championship, the Main League of the American Football Championship, the German Bundes League, the French Championship, etc. And, of course, everything will look like the present: the faces of football players, boots, hair, well, exactly like in real life. Even David Beckham will look like he just left at Wembley with his wonderful hairstyle.
‹
›
Home
View web version