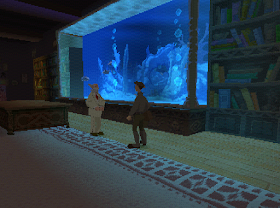 Genre: Action
Gameplay: Platform, Puzzle elements
Published by: Sony Computer Entertainment America
Developed by: Eurocom Developments Ltd
Released: 2001
Platform: PlayStation (PSX, PS1)
Atlantis and its fate have long worried the minds of the most remarkable people, and the myth that once the outstanding ancient civilization of Atlantis plunged to the ocean floor north of the Atlantic more than 11,000 years ago, has not received any confirmation yet, although many find traces of outstanding discoveries and extremely high and intellectual level. According to many, the foundation of modern civilization was laid down many years before its appearance. In particular, the ancient Greek philosopher Plato first mentions Atlantis in the 4th century BC. Many great scientists, travelers and explorers tried to find any evidence of the existence of the lost Atlantis, but for now ... Linguist Milo Thatch never doubted that the great Atlantis existed and maybe even rules the whole world. He sees the proof of this literally in everything. However, this is due to the fact that his grandfather from the earliest childhood stuffed him with various stories about Atlantis, told about mystical crystals with incredible possibilities. Grandfather was absolutely sure that the civilization that had sunk to the bottom once existed, and he devoted his whole life to proving that the Atlantean culture still affects the development of mankind, and Atlantis itself continues to exist somewhere in the abyss of the ocean. The old man died before proving his hypothesis, and his colleagues laughed at him all his life, because they did not believe in his assumptions. Now grandson Milo must by all means prove the truth of his grandfather. And then an ancient book was discovered, written in some strange language. It was called Shepherd's Journal, and was written by a man named Aziz, who, as he writes in this book, discovered Atlantis at the bottom of the deepest ocean basin. The cute, in whose hands this book fell, just caught fire from enthusiasm. Although many believed that this is a fake, created by some kind of crazy. However, our hero was able to decipher literally every detail in this book and thus became convinced of the existence of a mysterious civilization. Fortunately, he managed to create a team of experts who joined him and decided to conduct an underwater expedition, to find Atlantis and finally solve this great mystery. In this case, they would have become the most outstanding seekers of the adventures of the second millennium, and perhaps of all times and peoples. Although everyone understood that the operation was risky, and the chances of staying forever in the depths of the North Atlantic are very high. You need to have the sharp mind of the scientist and the heart of the brave warrior in order to survive, and then one of the greatest secrets of the universe will be revealed.

X button - Jump.
Button X + button on the D-pad - swimming, scrambling, selecting items in the menu.
The Circle button is a dive when in water / shooting or throwing weapons.
Square button - Punch.
Button L1 - "dive", i.e. A device that allows you to dodge an enemy attack.
Buttons on the D-pad - driving a vehicle, moving objects, as well as selecting and equipping various items.
Button R1 + button on the D-pad - look or aim in the right direction.
The Select button opens the Backpack.

Unlimited lives: Hold down the X + Circle + Square + Right buttons on the title screen. Start the game and hold down the L1 + R1 button when playing for Milo. He will say the word "Great!", And this will confirm the correctness of the code. However, sometimes this code does not work.
‹
›
Home
View web version