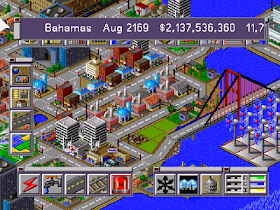 Genre: Simulation, Strategy / Tactics
Perspective: Bird's-eye view
Visual: Free-roaming camera, Isometric
Pacing: Real-Time
Gameplay: City Building / Construction Simulation, Managerial / Business Simulation
Interface: Point and Select
Setting: Contemporary
Published by: Maxis Software Inc.
Developed by: Maxis Software Inc.
Released: 1996
Platforms: PlayStation (PSX, PS1), DOS
In what case does a person feel omnipotent? Of course, when he has unlimited opportunities to create, manage and destroy. All these three opportunities in one place - in the game SimCity 2000. One of the oldest and longest-lived games in the genre of "God's simulation" finally comes and on the PlayStation.
If someone else does not know what this game is, explain; you have to rebuild and populate the city of the future, and if you wish, you can also destroy it. You start with a small piece of land that you can turn into the city of your dreams. For the inhabitants of your city you can create beautiful buildings - theaters, stadiums, schools and museums; and you can also demolish some quarters where crime is teeming, subjecting them to attacks by alien monsters or some natural catastrophes, such as an earthquake.
But not only such large-scale operations are for you. Becoming the mayor of the city, you will have to manage his life in a variety of settings: taxes, crime, pollution, urban development, roads, sewage and many others. If you manage all these things well and with the city budget, then the city's population grows. You receive additional revenues from trade and industry, and you will soon be able to realize geographic expansion. If things go badly - crime will increase, ecology will come to a deplorable state, then, perhaps, a small natural disaster will do you good.
The version for PlayStation retains all the main features of the computer original, added a lot and new, especially for the PlayStation. In isometric landscapes there are only two plans - large and small; clearly there is not enough in the middle.
Unfortunately there were problems with the control system. Since the mouse for some reason could not really get accustomed to the PlayStation, the developers have introduced a system of intuitive menus, but they sometimes close a part of the city from your master's view at critical moments, as a result of which you can not react in a timely manner.
Finally, an entirely new part is the part of the game, when you build a city, you get the opportunity to travel on it. But this time this possibility does not meet expectations. Graphics here with large plans turns out to be grainy, the animation suffers noticeable flaws, and then, you drive like a city - a ghost - all its inhabitants have somewhere to hide!
In a word, Sim City 2000 has remained what it was - intellectual entertainment, although it's unlikely that it will compete with such excellent games for the PlayStation as, Constructor or Railroad Tycoon 2 and others. Nevertheless, this is a worthy game, the classic of computer games and its place on the PSX can only be welcomed.
‹
›
Home
View web version