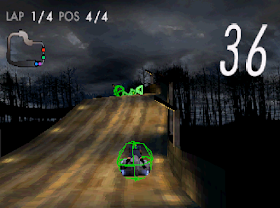 Genre: Racing / Driving
Perspective: 1st-person, Behind view
Setting: Post-Apocalyptic
Published by: Scavenger
Developed by: Zyrinx
Released: 1997
Platforms: SEGA Saturn, DOS
Scorcher - one of several games developed by them, made especially strong impression. We can say that here we enter the future of games - races. We do this on an incomprehensible cybernetic "bicycle". Complex tracks, dizzying speeds - all this creates the impression of the player that he controls some kind of neon ball lightning. On all the trails you will face hard trials; potholes on the roads from which your "projectile" loses control, the long winding tunnels in which you throw from one wall to another; narrow bridges above the ditches, in which some acid splashes and the like. Visual sensations, perhaps, are similar to the game Wipeout 2097, but here you must be in a much greater voltage.
‹
›
Home
View web version