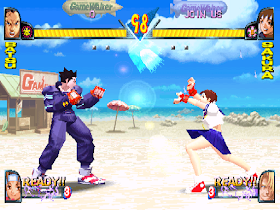 Genre: Action
Perspective: Side view
Gameplay: Fighting
Published by: Capcom Entertainment
Developed by: Capcom Co.
Released: 1998
Platform: PlayStation (PSX, PS1)
Rival Schools is a real game that visibly outclasses not only all Capcom games, but also other companies that are trying to do something in the video game market in the martial arts genre. Pretty fun will be when you look at these schoolboys, who despite their neat form somewhere learned to tear off their friends hands-feet. In this game there are a lot of elements from the game of the same developer - X-Men vs. Street Fighter, but here all the characters are completely transferred to the 3D arena, and with excellent results, which you most certainly will be very surprised.
There are fourteen completely new characters in the game, from which you can choose your warriors, including a few cheerful people and start from among high school students, not to mention a certain number of twins. Also there will be few teachers who wish to settle scores with their disobedient students. Players will be able to choose two characters on the selection screen, and they will be able to act as a super-powerful team, which will be able to knock out the spirit from all their rivals, take money from them for breakfast or something else. Although these two characters can not switch during one battle, but between the rounds one can change and even unite with the main fighter so that the detachment of losers can get by the ears so that for a week or so near the school no one would have appeared from them would. In fact, this is one of the most pleasant advantages of Rival Schools, since the special effects that are available in these battles are simply fantastic, they are remembered for a long time. When you perform complex combinations that are similar to those you recently did in Street Fighter Alpha series games, you will be able to bring down to the enemy truly incredible power, which he will not have any chance of stopping. All this can consist of three parts, firstly, the screen starts to darken and your character starts to conduct a multi-hit combination, while behind it goes something like a warm trace resembling a haze, I once saw the same effects in the arcade machines of the eighties. Secondly, your partner can run to the screen, or for that. To help you destroy your opponent by combining brute force, or covering you with kisses and thereby raising your morale, or simply improving your health by doing a massage session. And in the third, your friend can simply get involved in the fight and significantly increase your supercounter. All this is done very stylishly and aggressively, so you are unlikely to regret it when you see it.
So how do you play Rival Schools? To be honest, I will say that as soon as you see the first fight, you will be shocked, and pretty much. Thicken 3 was a great arcade conversion, but Rival Schools: United By Fate was a much more advanced game in terms of technology, not to mention that this is the most sexy game I've ever seen in this format, even nicer than Lara Croft. All fights are extremely fast and very tough, mercy is not given to anyone, the outcome of the battle is almost impossible to predict until the very last moment. Fists fly in a fight at such a speed that only watch them - and then, the work is not easy. And when supercombinations go into play, then it's no longer necessary to say that you are waiting for something or vice versa. You bite your tongue in surprise, how quickly and efficiently the techniques are performed. None of the battles of those that I saw did not develop so dynamically, I also did not meet two similar battles. The characters are all pretty large, bright, they move with a very high speed, while maintaining the smoothness of the outlines and cat's grace. In any case, you will succeed, because the reward that awaits you at the end of the journey is very great and for its sake it is worth trying - there is even a tournament mode in the game in which as many as eight players can compete. It is in the confrontation mode for two players that you will be able to assess how good this game is, because in it you never know what will happen to you in the next moment. The game can move from one-sided martial arts to very equal fights, since the control system in the game is very simple and intuitively clear.
‹
›
Home
View web version