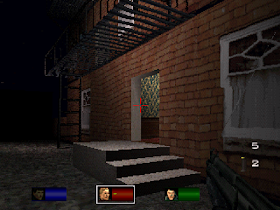 Genre: Action, Simulation, FPS
Perspective: 1st-person, Behind view
Gameplay: Shooter, Tactical Shooter
Published by: Red Storm Entertainment
Developed by: Rebellion Developments Ltd.
Released: 1999
Platforms: PlayStation (PSX, PS1), Nintendo 64 (N64)
The game is based on the classic plot of Tom Clancy and, as always this author, is associated with international espionage and terrorism. You lead an elite team, which in a series of missions must destroy terrorist camps and bases. On later missions, you gradually become clear that in fact there is a huge conspiracy, and the fate of the world literally balances on the verge of life and death. Unlike most games, here as in life - make a mistake - and the end, one shot can solve everything! To fulfill the mission, the player recruits a team of three brilliant expert fighters and leads his detachment in perspective from the first person in a very real full-fledged world. All 14 missions take place in different parts of the globe, the action is very dynamic and intense, do not get bored. Very carefully choose your team. If you are killed, it is not a game that will end, but the whole world will die! If one member of your team is killed, the control immediately switches to the next team member. At each of the three levels of complexity, the situation changes markedly: At Easy level you easily suffer many punches and damages, and enemies are blunt as rams. On the average (Medium) and hard (Hard), an accurate shot of the enemy means death, and terrorists are as steep as if from Hollywood fighters! Excellent levels of Wonder World, Oil rig, Congo, etc. set a wide variety of missions, and although there is no clear following of the plot of the famous novel by Tom Clancy, an exciting dynamic action is guaranteed.
‹
›
Home
View web version