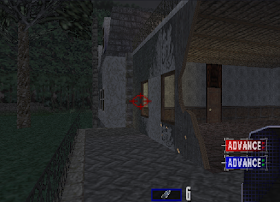 Genre: Action, Simulation, FPS
Perspective: 1st-person, Behind view
Gameplay: Shooter, Tactical shooter
Published by: Red Storm Entertainment
Developed by: Saffire
Released: 1999
Platforms: Nintendo 64 (N64), PlayStation (PSX, PS1)
The most famous tactical first-person shooter, with a story from Uncle Tom Clancy. If you have been playing games for a long time and love shooters, then most likely you already played this game, even if it just did not go out on both PSX, DreamCast, and PC. Gameplay next, under our order issued a squad of fighters, of which the mission can only take four people. Having carefully planned everything on the map, choosing weapons and reading briefings, you can go to the shooting of terrorists, it should be noted that you can not go and shoot everyone in a row, silence and accuracy will be your best friends throughout the game, otherwise all your fighters will quickly " the brave ". The graphics are certainly not the most impressive, but the same can not be called bad, in general, so-so. The game must be said for an amateur, but still try to play, maybe you'll like it?
‹
›
Home
View web version