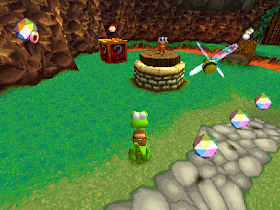 Genre: Action
Perspective: Behind view
Gameplay: Platform
Setting: Fantasy
Published by: Fox Interactive
Developed by: Argonaut Software Ltd.
Released: 1996
Platform: PlayStation (PSX, PS1)
Croc is the brainchild of the English development team Argonaut, which is known to video game lovers to work together with Nintendo over the 16-bit hit number 1, Star Fox for SNES and the development of the first 3D graphics accelerator, FX chip, for the same games console.
The plot of the plot is quite amusing. Everything in the game revolves around a people called Gobbo. These are peaceful creatures, very similar to small fur lumps. Once in their serene life there was a rather strange event. King Gobbo, Rufus, met the dawn on the riverbank, when suddenly a basket with a small crocodile swam up to him. At first Gobbo was frightened, deciding that this was the first representative of the insidious race of "crocodiles in the baskets", but since there were no more aliens, everyone calmed down and decided to take the crocodile to the upbringing. So in the valley of Gobbo appeared Krok. But there were in those lands and scoundrels - a gang of robbers and villains Dantini, with their leader Baron Dante. The happy and undisturbed life of the Gobbo valley did not give the last rest, and he decided to end it once and for all.
Without thinking twice, Dante just captured the valley and established his order there. Each of the Gobbo people was seized and imprisoned in prisons scattered all over the land, and all other inhabitants were turned into evil and treacherous creatures. Only Kroka managed to escape, which at the last moment managed to carry away on his wings the bold bird of Beni. She also convinced the frightened crocodile in the need to save his friends Gobbo and to speak out against the evil Baron Dante. At this point, you enter the game and, managing the young Krok, become the savior of the Gobbo valley. The plot is certainly childish, and the look of the game is appropriate, but the gameplay itself, like in Mario 64, is able to attract almost any player.
During the game you will explore 45 colorful and varied levels, divided into more than 250 gaming arenas. A set of levels is standard for such a game. You will visit the forest and the desert, in the ice and hot lava, and at the end of the game you will find the terrible castle of Baron Dante himself. At the end of each of the levels of Krok, as usual, the boss waits. Do not be frustrated by the word usually, as the bosses in the game are just superb. As you, for example, a meeting in the ring with a huge bug - the boss of the first level. In general, not in the example of the game itself, the developers had enough imagination.
To fight bosses and generally fight off numerous enemies, Crock has a lot of opportunities, almost like Mario. He can run, jump and even fly, though not without help. There are levels where the crocodile has to dive into his own element, water, where you already have plenty to swim. With all sorts of wreckers, the crocodile is straightened either by an ordinary jump on the head, or by a powerful tail, a la Gex. It's a pity that Krok, as a young man, can not use all his natural strength, otherwise he would just take a bite of everyone and deal with the end. And, like Sonic, Krok lives quietly, while with him there is at least one object that can be collected at the level. In general, Mario was crossed with Hex, seasoned with Sonic and got a new hero.
Character management does not stand out, it's possible to use an analog. Players are fully free to control the camera, which will greatly facilitate the task of navigation in the 3D world of the game.
Now let's talk about the most important and unique feature of the game, namely its graphic performance. It can be safely said that it is this factor that attracts such attention to this, in the rest of the standard work. It is necessary to recognize that the game looks just great. Magnificent textures, good work with lighting, high enough resolution and almost no brakes - all you can find as in the version of the game for the PlayStation. Croc can be called a demonstration of the possibilities of PlayStation. The character itself is so realistic that it looks, if not a living crocodile, so definitely revived a toy.

How to find Gobbo?

How to find crystals?

At once it is necessary to understand that these wonderful crystals greatly facilitate the life of Kroku. He can take "on the chest" any blow to the enemy and not die! And while he has at least one crystal, he will withstand any attack (the crystals serve as a buffer). As soon as you collect 100 White Crystals (White Crystal), you will get an extra life.
There are five more kinds of color crystals (Color Crystal), which will provide you access to the Crystal Door. These crystals can lie "in the open", be hidden under boxes and even disguised as White Crystals. Find them all is not very difficult, but to escape the dangers on the levels is much more difficult!

How to catch the "elusive" Gobbo?

Some Gobbo is not so easy to get out of the diabolical baronial paws. We can offer the best technique for their release. Here, perhaps, a classic case. Observation is your only right bet. After all, you must choose the right box! Fortunately, this small test will need to be done twice, and at the very beginning of the levels. In short, save the game in the memory card before the beginning of each new level, and everything will be fine.
‹
›
Home
View web version