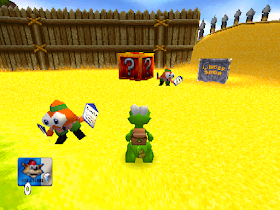 Genre: Action
Perspective: 3rd-person
Gameplay: Platform
Published by: Fox Interactive
Developed by: Argonaut Software Ltd.
Released: 1999
Platform: PlayStation (PSX, PS1)
Fox Interactive and Argonauts Software put on a new game for the players, namely the continuation of one of the most successful clones of Super Mario 64 for PlayStation - Croc: Legend Of The Gobbos under the modest name Croc 2. For its time Croc: Legend Of The Gobbos was the best attempt to copy the 3D world of Super Mario 64, and the coolest protagonist - the green Crocodile Croc - could not be better suited for the title of "Honored Representative of PlayStation in the Action genre," but the arrogant Crash Bandicoot and his companions, with an even steeper approach, intercepted this title. But the developers of the first Croc, having rested a bit, vowed that no Bandicoot or any other unknown animal could stop the greenest and the toothiest, and prepared for the continuation of the Croc 2.
Croc 2 was born on the mercy of a wonderful and very talented team of programmers Argonauts Software, broke its office on the shores of foggy Albion (ie, in England), at one time they became famous for having developed for the Super Nintendo platform revolutionary for those times the game Star Fox. And she was so good that she admired some advanced gamblers and to this day. After listening to flattering words for themselves, Argonauts Software set off on a solo voyage, breaking with Nintendo, and began to work for the benefit of the PlayStation. This friendship gave an excellent fruit - the game Croc. To some extent it was the green crocodile that served as the basis for further delights, including Gex: Enter The Gecko, Jersey Devils, Spyro The Dragon, and Crash Bandicoot, etc.
Just want to make a reservation that the engine in the game is used the same as in the first part of the game. For the past time, naturally, it has been corrected, decorated; added a variety of new opportunities, previously impossible, but this is just a cosmetic improvement, and, therefore, the final result looks a little better.

Kroc can easily defeat Dantini. stepping on his head in a jump. To perform this reception, press the jumping button, and then in the air, press it again. Krok with the same method can crush the boxes scattered throughout the levels.

Such a maneuver allows Kroku to fly higher into the air. Jump as usual, and then, without sinking to the ground, double-clap on the jump button and hold it. At the moment of landing again fly up into the air, like on a springboard.

To perform this trick, scroll forward, hold down the L1 + L2 buttons - as a result, Crock will perform a few tumbling forward. General information.

These boxes of brown boards Krok can move only on the individual painted areas of the floor, on which they find. Moving the boxes and jumping from them, Krok sometimes can get into secret zones and find useful items.

Boxes of reddish color with a big question mark Kroc can open, trampling them in a jump (you know how). They can find standard stones, but in some cases, special items that will help Crocus in his adventures.

Gongs are located in different places of the levels, the blow in them is equivalent to the temporary preservation of the game at the point of shipment. So if you die somewhere on the level, do not be upset, just start the game from the gong you hit last time.

If you manage to collect 100 standard crystals at a level, you will get a life. Sometimes these crystals are difficult to find, so very carefully search the entire territory and premises.

Five special colored crystals are on each level, and at least one crystal is extremely well hidden. You will be able to collect all five crystals, you will receive as a reward a gold statuette of Gobbo.

After collecting five colored crystals, you will receive a cloaked statuette. Having received the same golden statuette at each main stage in the village, you will be able to gain access to the secret stage. But after completing this secret stage, get a piece of the puzzle. After collecting all the pieces of the puzzle, you will be able to open the secret "tribe" at the end of the game.

These hearts increase the level of Crock's health. The maximum level is 9, and you need to reach it as quickly as possible.

When you collect enough crystals, you can visit the Pete store, where you will find the whole set of useful items.

"Jelly" has three options: Orange, Lemon and Strawberry. Each of them has its own characteristics, and they can be used at special points of the level. With their help you can drop in as if from a springboard into previously completely inaccessible places.

This wonderful miniature device is very useful at certain points in the levels. For the time of its use, the control switches to Gobbo's baby. Direct it along the narrow "skirting board". you can penetrate the narrow inaccessible places and collect hidden items there, as well as the crystal You can not do without them.

Take these binoculars from the first ("?") Box in the village of Sailor Village. Use it when examining levels in search of items and secrets.

Place this rubber thing on one of the blue rings and you can jump onto the high cornices for Bonus Gems, etc. There are 40 credits.

With this thing you can jump even higher, put it on the green ring and jump well very high! There are 40 credits.

With this thing, Crock will beat all world records in jumping, but more importantly, he will be able to jump over wide cracks on several levels. There are 80 credits.

Place this "clockwork Gobbo" on a special round plinth and you can send it to collect completely inaccessible items. There are 50 credits.

Each pitcher holds only one additional heart, whether it was found or extracted from crystals. You can get a pitcher free of charge in the village of Sailor Village. There are 250 credits.

When you do all your business in the village, you are teleported to the next. Use this Bowl in the Pete store to return to the previous village, find secrets and all that.
‹
›
Home
View web version