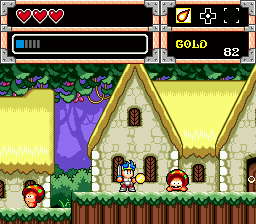 Genre: Action
Perspective: Side view
Visual: 2D scrolling
Gameplay: Metroidvania, Platform, RPG elements
Setting: Fantasy
Published by: SEGA of America
Developed by: Westone Co.
Released: 1991
Platforms: SEGA Genesis / Mega Drive, TurboGrafx / PC Engine, SEGA Master System
This is the fifth part of the Wonder Boy series. In Monster World, everything was calm and everyone lived in peace, but once this peace was broken by monsters led by the sinister BioMeka. The protagonist of the game Shion, swore in, so that it does not become clear the land of Monster World from monsters and once and for all do away with evil. This part of the game has undergone significant changes in comparison with the previous parts. Now the RPG elements have been added to the game. You can talk to other characters, swing your character, collect gold and buy weapons and other auxiliary items on it.
In Brazil, Tec Toy has adopted the game under its own market. The game was translated into Portuguese, and the main character was replaced by the comic book hero Monica's Gang.
The game is known by such names as "Wonder Boy V: Monster World III", "Wonder Boy 5: Monster World 3", "Turma da Monica na Terra Dos Monstros".

A and at the same time Up (or Down) - the use of magic or some object. Pressing "Start" during the game. Select the desired magic or object on the right side of the screen (SELECT), press A or C and select one of the two squares at the top right next to the joystick crosspiece.
B - blow with a sword or a spear;
C - jump;
-> - to talk to someone, read something, enter the door;
You can use 6 magic (they appear gradually, during the game):
<- -="" br="" door="" exit="" the="">
FIRM STORM - fireballs;
THUNDER-lightning;
SHIELD - protective field;
QUAKE - earthquake;
POWER - increase weapon power;
RETURN - the magic of the return (you find yourself in the place of the last recording). During the game you will need different types of weapons, as well as shoes, some of the necessary things can be bought in stores, and some you will find or get during the game (see description).
‹
›
Home
View web version