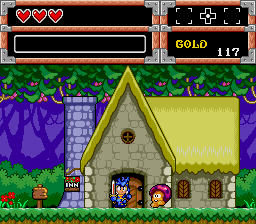 Genre: Action
Perspective: Side view
Visual: 2D scrolling
Gameplay: Metroidvania, Platform, RPG Elements
Art: Anime / Manga
Setting: Fantasy
Published by: Hudson Soft Company
Developed by: Westone
Released: 1994
Platforms: TurboGrafx / PC Engine, SEGA Genesis / Mega Drive, SEGA Master System
The port with SEGA Genesis, but with the changed graphics (another palette, some monsters, although I did not notice any serious differences), with different melodies from the original. And also with the addition of scenes at the beginning. There is also an American version, but it is considered one of the rare on the TG-16 CD, so at auctions it is sold at a price.
The world of monsters was once a quiet place. However, the army of dumbhead creatures invaded its territory and chaos began! A young man named Shion (in this part replaced his name on Dyna) vowed to free the World of monsters from foreigners in order to bring peace and tranquility to that land.
In each district it will be necessary to solve various tasks. Somewhere you have to meet someone, and somewhere you will have to fight the monster to pick up a certain thing. Various artifacts will make it possible to reach hard-to-reach places.
In general, this is one of the best games I've ever played. The brightly worked graphics (especially the villages), excellent music and cute gameplay will not leave anyone indifferent.
In Asia, this game was released as Chou Eiyuu Denstsu - Dynastic Hero.
Also see the series of games - Wonder Boy.
‹
›
Home
View web version