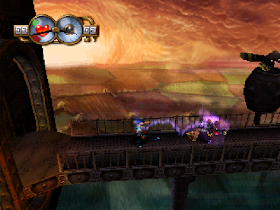 Genre: Action
Perspective: Side view
Gameplay: Platform, Shooter
Setting: Sci-Fi / Futuristic
Published by: Interplay Entertainment Corp.
Developed by: Shiny Entertainment
Released: 1998
Platform: PlayStation (PSX, PS1)
You will torture unfortunate helpless gnomes, in order to properly demonstrate the dark side of your nature in this retro platformer. Crash usually did it all with great fervor, in the game One it was done with a lot of noise, and Pandemonium! - elegantly and unrepeatably. There are no such tricks that could have added additional details and other tinsel, could transform a 2D game into a 3D one - but the developers of Shiny are recognized masters of the genre, which was very well demonstrated by the game Earthworm Jim 2. As a result of active work on the three-year program for the development of a new platformer in this complex 2.5D genre (meaning the use of 2D and 3D objects and environments), using a brutal policy such as "if it can not be broken, then it must be removed right away from the screen", Wil appeared d 9. You will immediately recognize this game, as the management of the main character is conducted just like before, right up to the habit of grabbing the edge of the platform, with not too successful a jump.
The story for this time mostly revolves around the adventures of the villain Karna - the robber of the planets, which completes a long work on his "world of leisure"; this world he collects on pieces from the planets he likes. You play the role of Wex'a, a small orphan, and you will have to fight through fifteen levels of terrible mess and other hassles, as part of a gang of teenagers called Wild 9. The most important thing in this game is to get as quickly as possible with such a powerful weapon that is in The full disposal of Vexa is the Rig attached to the shoulder of our hero. It's such a thing that you can use with a special glove that spits out pieces of completely insane electromagnetic death to the enemy. There is no such thing as instant killing in the game, only sadistic torture, before a terrible death. In addition to other, more reasonable options for using Riga, you can behave like a true Torquemada, in order to hit enemies against the wall, then one or the other, until they fall into a million small pieces, and you can carry their injured bodies to wherever you want. Drowning, suffocation by toxic gas - all this you can use on your way to victory. But - and it's very big. But, the process of playing very soon becomes monotonous, so you can hardly keep much interest in the game for more than a couple of levels. At the same time, we must admit that the level design is done with great art, there you will find a lot of inspired animation and attention to detail that could be expected from Shiny. If you get too close to the edge of the smoking abyss, then Vex will start coughing like a tuberculous patient. If you can not accurately calculate the jump next to the fire and he spends around the fire, clinging to his buttocks and whining piteously, all this looks extremely convincing and shows that the developers paid much attention to detail, this attention was touched practically by the inhabitants of all levels.
From time to time, the mechanism that handles the collision of the characters fails - this is especially noticeable, when you manage to paralyze the enemy and you attack him in order to kill - you can accidentally pass through. Speed ​​in Wild 9 is a great advantage, as the game starts at a fairly quiet pace, with an introductory briefing that helps you get used to the control of both Rig and a large number of other alternative weapons, but very soon the action is noticeably accelerated, so you it will be necessary to strain very hard to keep up with the development of the plot. Instead of killing bosses, you will have to solve quite complex riddles - for example, use the talents of your companions in order to move forward. At some point, you will need a man-bomb, which can be thrown on the level, and then installed in front of an impenetrable door to blow it up and open its way. True, this does not revive the monotony of the game, even the crazy race on quite 3D jet bikes. The game at first seems to you damn exciting, thanks to a very funny Rig, but after that you will not soon be able to see something new, so it can not boast of a great variety of this game.
‹
›
Home
View web version