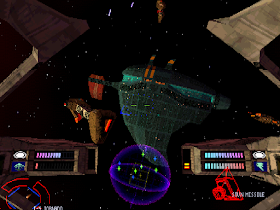 Genre: Action, Simulation
Perspective: 1st-person, Behind view
Vehicular: Space Flight
Gameplay: Vehicular Combat Simulator
Setting: Sci-Fi / Futuristic
Published by: Psygnosis Limited
Developed by: Psygnosis Limited
Released: 1997
Platform: PlayStation (PSX, PS1)
Distant future. Superluminal engines were never created, but the discovery of wormholes (holes in space) allowed the colonization of nearby stellar systems. New worlds were much more comfortable than the overpopulated Earth, and many left their home planet in search of a better life. Soon an acute shortage of resources in the solar system led to an increase in the exploitation of the colonies by the metropolis, the Earth Empire. Pumping out the riches of the new planets resulted in an open conflict. Colonies announced the withdrawal from the Earth's Empire and the creation of the League of Free Worlds. Naturally, the war began.
The first part of the series was released at the then still young PlayStation in 1997. Dynamic battles, various missions and a fascinating plot immediately made her a favorite of the players and critics. It would seem that there was no breakthrough in the genre: the battle of fighters in space against the backdrop of the plot against the evil empire - all this was already in Star Wars and in good games based on motives. But the quality combination of well-chosen components gave an excellent result.
The game was incredibly difficult - enemy fighters knew all the maneuvers of avoiding the fire, and the pursuit of one could last several minutes. And the attack on the cruisers was a guaranteed suicide because of their incredible firepower. It did not even save that missions often took place with the support of Allied fighters. It is worth noting the system of weapons and armor - each object had two types of protection: energy shields and cladding, respectively, weapons were divided into classes designed to defeat only one of them.
The nameless pilot of the League fighter was to survive in a variety of battles in five star systems, including Alpha Centauri and the Solar System. Among the missions met as a banal destruction of the superior forces of the fleet of the Empire, and more interesting tasks. Choose a ship and weapons before the battle was impossible. Interestingly, the failure of a particular battle did not mean the end of the game. Depending on the number of successful and failed campaigns, the player came to one of five endings, of which only two could be called good.
‹
›
Home
View web version