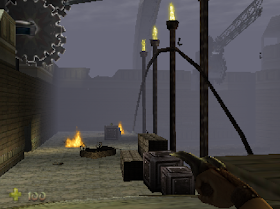 Genre: Action, FPS
Perspective: 1st-person
Gameplay: Shooter
Published by: Acclaim Entertainment
Developed by: Iguana Entertainment
Released: 1998
Platform: Nintendo 64 (N64)
If you want to taste a great 3D-action, then this game is for you. It should be noted just a great performance of the game for true gourmets shooters with the elements of the quest. A variety of weapons, cunning and terrible monsters, thoughtful and exciting gameplay (and, moreover, very complex), video clips, cool music and excellent graphics - everything is done at the highest level. Turok is facing very difficult missions, so prepare for a long and bloody battle. Play in N64 and not play a series of games about Turok just can not. Recommended for everyone.
‹
›
Home
View web version