The Legend of Zelda (NES) 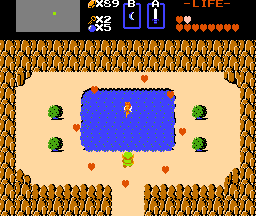 Genre: Action, RPG
Perspective: Top-down
Visual: 2D scrolling, Fixed / Flip-screen
Gameplay: Action RPG, Metroidvania, Puzzle elements
Art: Anime / Manga
Setting: Fantasy
Published by: Nintendo of America Inc.
Developed by: Nintendo Co.
Released: 1987
Platforms: Nintendo (NES), Super Nintendo (SNES)
The first part of the epic series about the adventures of the young hero Link in the kingdom of Khairul, each time saving the princess Zelda from the evil sorcerer Ganon. A quality Action-Adventure game with sophisticated puzzles and dangerous traps that will not let the player get bored.
How to start the game from the second stage:
To go immediately to the second stage, just enter "ZELDA" as the name of our character.
To save in Zelda:
Time, in every stage, kill all enemies except one. If you leave one enemy alive you will not have to face a full screen of enemies when you return to this zone - the only enemy will remain on the screen, and you will easily cope with it.
‹
›
Home
View web version