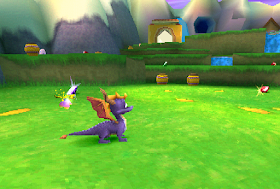 Genre: Action
Perspective: 3rd-person
Gameplay: Platform, Puzzle elements
Published by: Sony Computer Entertainment America
Developed by: Insomniac Games
Released: 2000
Platform: PlayStation (PSX, PS1)
Spyro: Year Of The Dragon - the third video game series Spyro The Dragon. This is the last game of the series, released for the PlayStation platform, and the last game developed by the company Insomniac Games. This is the only game about Spyro on the PlayStation, which did not come out in Japan. Every twelve years, fairies bring dragon eggs to the world of dragons. But one day all these eggs were decided to kidnap Rinoki, led by the wizard Bianca, who climbed out of their holes leading to the Forgotten Realms. While the dragons were asleep, they managed to steal almost all the eggs. However, Bianca, carrying the last egg to the hole, stepped on the tail of the sleeping Hunter. In pain, he woke up and screamed. Hunter's cry awakened all the dragons, including Spiro. Bianca, seeing that it was bad, ran to the hole. Hunter ran after her, but stumbled over the stone. Spiro roasted Bianca, but she managed to climb into the hole with the egg. Meanwhile, the fairy Zoya followed Bianca and later examined the dragons about the whereabouts of the eggs. Dragons wanted to follow the wrecks in forgotten worlds, but could not get through narrow holes. As the only ones who managed to crawl through the burrows, the pursuit of enemies with the goal of returning the eggs began Spiro, Sparks and Hunter.
Spyro, Sparks and Hunter fall into different worlds, in which there is a system of portals, allowing nonlinearly pass levels. When passing levels, a character of this level becomes accessible, with the help of which you can get to the next world (he repairs / builds the vehicle). After passing through all levels of a certain location, you can use the vehicle to move to a new world. When moving to another world, you need to fight his boss. The last boss is the queen, you can fight with her if you collect 100 eggs.
Also worth mentioning about the capabilities of Spyro. If in the second part he studied skills for money from Tolstosum, then in the 3rd part all the skills of Spyro are available to him from the very beginning. But now Sparks can acquire new opportunities. As soon as Sparks passes his level, he is given a certain opportunity. After passing the first Sparks world, the dragonfly can collect treasures, being far from Spiro (more simply, the collection radius increases), the second one can point to the treasure if you simultaneously press the L1, L2, R1 and R2 buttons, the third gets a lot of power the dragon is now being killed not with 4-eh, but with 5-times), the fourth - they give Sparks the opportunity to break vases and barrels, not bothering Spiro. Although, by the time they are almost gone.
In the end, familiar to the past games Manibegu can take revenge and take back everything that was spent. To do this, you need to chase him, setting him on fire or biting him. He does not run fast, so this is a fun and easy exercise. There are four bonus levels in the game, the latter opens if you collect 149 eggs and 15 000 crystals. The last, bonus level is a snow-covered place, the type of tasks resembling the Shores of Dragons from the 2nd part. In total at this level you can find 5000 crystals (!) And fight with the Sorceress for the 2nd time, on flying saucers (prize - last, 150th egg). Another interesting thing is that this bonus world is not counted in statistics, so when it passes, the value of the game progress is equal to 117%.
‹
›
Home
View web version