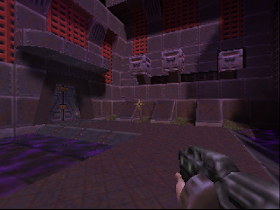 Genre: Action, FPS
Perspective: 1st-person
Gameplay: Shooter
Setting: Sci-Fi / Futuristic
Published by: Activision
Developed by: Raster Productions L.L.C.
Released: 1999
Platforms: Nintendo 64 (N64), PlayStation (PSX, PS1), DOS
For fans of this game, who played (and continues to play) on it on a PC, probably the Nintendo64 version will seem slightly disappointing. First of all, it is difficult to adjust the graphics so as to completely avoid errors and achieve maximum effect. In other respects, the game completely corresponds to what Quake II is. Weapons, enemies, secrets - everything from there. Missions, of course, are somewhat different, but in fact there should not be a complete repetition. Of course, the PC-shnaya version is better, but this one is not bad either.
Redesigned port of the same game with PC. Genre is a first-person shooter. On Earth attacked a race of aliens, known as "straggs", using people as living batteries. A platoon of fighters is gathering from the Earth, which is sent to Stroggos, the planet of the Stroggs, to kill their leader Macron. Your hero will have to single-handedly overcome a whole complex of builds of stroggs, like a prison or a factory, to get to Macron and finish him off. Graphically, the game looks the same as in the original, although a bit darker (but you could also slightly improve the graphics and performance of the game if the player was able to use the Expansion Pak for N64). The sound remained exactly the same as in the PC version - but there is no music here (most likely, due to the limited size of the cartridge). Management is quite convenient. As for the gameplay, here is a little non-standard formula "kill them all." In addition to the battle with the stroggs, you will have to complete several tasks before you reach the Macron. (like establishing a connection with the ship of the Earth Fleet for further tasks, or eliminating the giant air defense of the Strogg, known as Big Gun). This version of the game is completely different levels, for both single player and two-player mode - deathmatch. As for the last mode, it is possible to play the four of us at once in the mode divided into 4 parts of the screen (however, it is possible for both together and the three of us). The game is considered a legend in its genre, so it is recommended for all fans of the genre of first-person shooters, and fans of games from id software!
‹
›
Home
View web version