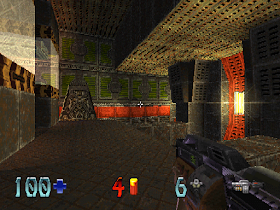 Genre: Action, FPS
Perspective: 1st-person
Gameplay: Shooter
Interface: Direct Control
Setting: Sci-Fi / Futuristic
Published by: Activision
Developed by: id Software
Released: 1999
Platforms: PlayStation (PSX, PS1), Nintendo 64 (N64), DOS
The plot of the game Quake II is quite simple. The landing force, which was to land on the Strogg planet, was ambushed. But, according to the coincidence of random events, the assassin Bitterman is able to survive. And he, having established a connection with the center, continues the operation "Overlord" alone.
Now a little about the game and its gameplay. This is a first-person shooter. The game was released in late 1997. The game is a great variety of weapons and enemies. Enemies have a well-developed AI (artificial intelligence). What makes the game even more interesting and rich. As we go through the game and perform missions (missions), we delve into the plot. For example, we learn that from the captured soldiers they make straggs, that is, they are subjected to rigging.

If a behemoth of one breed inflicts a wound on another race's monster, they will clutch in a deadly battle. When this happens, just step back and wait for its outcome. And then get rid of the weaker winner.
Backpedaling during a hot fight with monsters or a friend in Deathmatch mode is a very important element of combat tactics, master it, bring it to perfection, otherwise in the Quake worlds you will not survive!
Unlike a game like Doom, in Quake you need to accurately aim and do it as quickly as possible. Learn the technique of aiming, useful as in the game, and in Dathmatch mode
It is very important to deftly and in time to dodge the attacks of opponents. If you are attacked by a rocket or a grenade, immediately take a step in one direction or another. The missile will fly by, you can successfully counterattack.
In the event of an explosion, a shock wave that causes damage is spreading in all directions for a certain distance. You can therefore shoot an opponent in the legs or even in the wall nearby. This technique is very good against fast, clever enemies, using waste to the side and kickbacks.
It is very interesting to use in the battles with monsters, who own several types of attacks - Sweet Spot. This is like a "dead zone" for certain attacks, and if you find yourself at such a point, the enemy can not quickly figure out how to attack you. Move back and forth, coming in and out of the attack zone - the monster is simply lost! How to find this "dead zone" - figure it out during the game. Use this technique against the Ogres and the Shamblers.
Experienced players can, if necessary, use a "rocket jump" to jump lightly from one place to another. To perform such a jump, you must press the "jumping" button, and simultaneously launch the rocket into the ground. This jump is very useful in Deatmatch, you will easily jump from platform to platform, as well as to the highest and seemingly unattainable cornices. And from there to bring down on the enemies just an avalanche of fire. Such a jump is good against the opponent in battle, but it requires too much health, so it is not advisable to use this method in battles with monsters.
As closely as possible, examine the levels at which the battle takes place, look into every crack, in every corner, find the best weapons and armor. You can get a fair advantage if you need to explore the territory. You can also by the edge of your eye crochet on the other half of the screen to make it easier to detect the enemy.

Enter the water on the right, dive and find armor with ammunition.
Shoot the boxes with the skull image, you will find an armored vest (Jacket Armor).
Jump off the edge of the slope, kill the light guard, shoot the wall behind the stairs and find the cartridges, then climb the stairs back up.
Shoot the red symbol above the door, open the wall on the right, where you will find Super-Adrenaline.

On the way back, you will see an open hatch, and there's a terrific Quad Damage thing.

Jump into the water, go under the water, here under the steps you will find another Quad Damage.
Go down the slope in front of you and shoot into the wall - the passage will open.

Jump to the lower zone, turn left, go to the passage on the left, behind which you will see a cracked wall. Shoot it and it will not stand.

Shoot the red symbol where the Gunner was to open the wall section to the left. You will find inside megazdorove.

Cut down the lasers, then go through the big gray doors. At the end of the passage find a room with Enforcer and Berserker. Shoot the wall near the cartridges and find ChainGun.

Open the cage in front of you, shoot into the back wall and find Hyper-Blaster.
Mission 2, Location 5, the boss of the Tank
In the zone of the boss there are two secret rooms on both sides. Shoot into the wall and be able to open them.

On the right, find the Quad Damage in the niche; Shoot the wall to open this alcove.
Shoot into the wall in the left corner and find Iron Maiden, go to the elevator, you will find another same piece and Gunner. From here you can finish off the Spider-Arachnid and Berserker below.

Go to the other side of the column with the card and shoot it. Find a ladder, in the upper part of which you will find armor of Body Armor.

Jump off the edge of the bridge and go through the sewage, you will find an armored suit in the last room.

Shoot the symbol on the wall and find the armor.
Pull yourself against the wall, walk along the narrow cornice, find armor and Environmental Suit (protective suit of chemical protection type).
Shoot into the slope to the left, the passage will open, you will find inside the power-up invulnerability.

At this point, you need to raise the section of the gangway to the right of the toxic waste store (Toxic Waster). Take a chemical protection suit and dive under the water. Follow the passage, find the Rail Gun behind the bars, shoot the symbol at the top and get this weapon.

Shoot the wall to the left, take a few grenades inside and find Strogg Dog.
Shoot the red symbol to the right of the bridge, turn around, enter the edge of the bridge where you will find the Quad Damage.

Go through the door, shoot the first window on the left, at the bottom of the pond below you will find a bunch of ammunition.
‹
›
Home
View web version