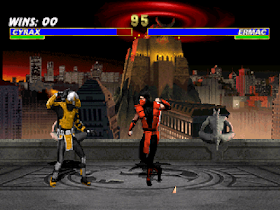 Genre: Action
Perspective: 3rd-person, Side view
Gameplay: Arcade, Fighting
Published by: Midway
Developed by: Avalanche Software LLC
Released: 1996
Platforms: PlayStation (PSX, PS1), Nintendo 64 (N64), DOS
Mortal Kombat Trilogy - a collection of all fighters from all other versions of the game (MK, MK2, MK3 and Ultimate MK3), plus several new fighters and new techniques. This is a wonderful gift for fans of the series - at least until the release of the 3D version - Mortal Kombat 4.
Impressively looks the title screen with 32 characters! These are the heroes of MK3 (including new fighters added for Ultimate MK3 and three secret fighters) plus four bosses from the early MK series, plus Baraka and Raiden from MK2, plus new characters - Ryan and Nub Saibot. But that's not all. In fact, at the start you have four more characters available: by highlighting Raiden, Kano, Kun Lao or Jax, you can transform them into earlier versions! In these initial versions, all the old tricks have been saved for them (and new ones have been added). For example, Kano, according to MK1, can still wrest from the opponent a heart from his chest and simultaneously has an impressive new technique with a knife; Raiden from MK1 can send air torpedoes, Jax from MK2 - air fireballs, etc. Finally, in the trilogy there is at least one new secret fighter. Total - 37 characters!
And other old acquaintances, as a rule, acquired new qualities, and some even learned new finishing techniques. A new interesting circular movement appeared in Kano: he sets off around the screen, bouncing off walls and floor. Scorpio lost his previous reception Fatality with a lot of punches, but got a new one: his giant fiery hand is squashing the opponent on the floor! The sector learned to send a double shell to carry out a combination of two strokes. And in Sub-Zero in the Mask appeared a second reception Fatality - Ice peak!
In addition to the main characters, you can also manage four "bosses." They differ in that they do not conduct chain combinations and finishing techniques, like others, but each blow is truly shattering. And they have some new techniques:
The new version also includes all the sites and furnishings used in the previous four versions. Some of them, however, have undergone some changes. For example, Shao Kang now sits on the throne in the Kung Fu arena of MK1 instead of Shan Zhong. Pit Fatalities techniques can be performed in all the original arenas, except for Pit II (this would require too much effort of the animators). And if you can not remember how each of these fighters spends this fight, then fight at the initial level of Pit - and just hit the opponent with an uppercut to finish him off!
What else can you add? Now, along with such final tricks as Fatality, Friendship, Babality and Animality, each fighter can perform Brutality - an unusually long and complex combination in which the speed of movement increases to such an extent that the opponent literally explodes and leaves horns and legs remain! But if you used to have difficulties even with mastering Fatality, then you will not be able to learn how to perform Brutality! And one more interesting innovation - Agressor Bar: the more aggressively you fight, the faster it grows, and if you break through the blocking of the enemy, it fills up very quickly. When the whole word is displayed on it, the letters will start flashing, and for your fighter a certain shadow will appear, meaning that for a few seconds it has become much stronger. A useful innovation that quickly sifts out those players who spend a lot of time on endless locks.
‹
›
Home
View web version