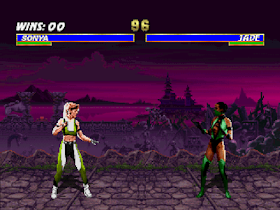 Genre: Action
Perspective: Side view
Visual: 2D scrolling
Gameplay: Fighting
Interface: Direct control
Setting: Fantasy
Narrative: Martial arts
Published by: Midway Games
Developed by: Midway Games
Released: 1996
Platforms: Nintendo 64 (N64), PlayStation (PSX, PS1), DOS
This is a famous fighting game, where you can play both one and the other. A lot of characters to choose from all the first three previous parts of the game. And this game is famous for its blood and fatalities (hammering the enemy into meat in the literal sense), so if it turns you off then do not swing, and if you are interested or do not care, then bear this in mind. By the way, the game itself has not changed much since the appearance of its 16-bit version, except that graphics performed much better on the N64 platform.
‹
›
Home
View web version