Ghost in the Shell (PS1) 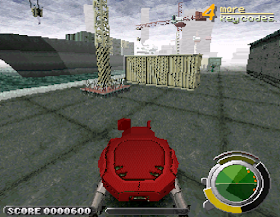 Genre: Action
Perspective: 1st-person, 3rd-person
Gameplay: Arcade, Shooter
Setting: Cyberpunk / Dark Sci-Fi
Vehicular: Mecha / Giant Robot
Published by: THQ Inc.
Developed by: Exact, Production I.G
Released: 1997
Platform: PlayStation (PSX, PS1)
I think that everyone has already guessed that we are dealing with nothing else than with a virtually duma-like game. True, lovers of close labyrinths and other enclosed spaces are unlikely to be happy, since most of the action takes place in the fresh air. Battles are fought among a typical urban-futuristic landscape, which is characterized by interesting views and full three-dimensionality. Although, perhaps, the picturesque can be called only with a stretch, but three-dimensionality - the mosquito of the nose does not undermine.
It's just amazing and gameplay. In addition to simple actions, you can crawl on walls, move strictly in the left or right direction, shoot, throw grenades and jump. It would seem how much time you spend before you learn how to move professionally! But no, the management is extremely simple, and it's enough even a little time to make you feel like a fish in the water. Or like Motoko Kusanagi in Fukoshima ...
Again about the visual side of the game. If I was asked what is Ghost In The Shell - 3D-Action from the first person or from the third one, I would be in great difficulty. A somewhat unusual look from the first person behind and slightly above (or quite the reverse). But this originality does not interfere in the process of the game, and besides, it distinguishes Ghost In The Shell against the background of classic shooters. Graphic drawback is only some absolutely inexpressive palette, but otherwise the best traditions of the good old genre are supported.
In general, the game leaves a pleasant impression, one thing is not clear, why did developers need to address the film. Ghost In The Shell is not bad by itself; a few more ideas and ... you could shoot a movie on the plot of the game.