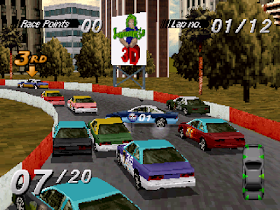 Genre: Action, Racing / Driving
Perspective: 1st-person, Behind view
Gameplay: Vehicular Combat Simulator
Vehicular: Automobile
Published by: Psygnosis Limited
Developed by: Reflections Interactive Limited
Released: 1995
Platforms: PlayStation (PSX, PS1), DOS
The first game in the series Destruction Derby. At one time (in 1995), this game was a huge success for fans of games. Complex tracks, sharp turns, incredible collisions - and all this with good (for 1995) sound and graphics. The game is in three modes, in each you need to achieve a certain goal. In the first, - to beat and destroy all rivals, moving on a small field (something like playing Twisted Metal, but without weapons). In the second - to overtake all on the track, while you have to bring to the collision of other cars, for which you get points. The third mode - the usual race mode inherent in most racing games - to come to the finish line first, while not allowing yourself anything superfluous.