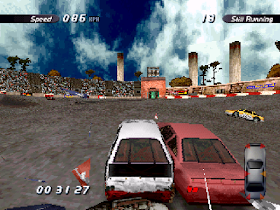 Genre: Action, Racing / Driving
Perspective: 1st-person, Behind view
Gameplay: Vehicular Combat Simulator
Vehicular: Automobile
Published by: Sony Computer Entertainment of America
Developed by: Reflections Interactive Limited
Released: 1996
Platforms: PlayStation (PSX, PS1), DOS
The second part of this game represents nothing but a meat grinder on wheels. But in principle nothing is different from the first part. Here, all this looks much prettier than before. The tracks in Destruction Derby 2 are better developed and become longer than before, so the overall emphasis in the game has shifted from combat aspects to racing. The kinetics of cars has also improved significantly, and the catastrophes are more spectacular (cars are now turning over, spinning on the spot, and flying through the air (usually in a ditch or in the abyss.) There are, of course, Destruction Derby 2 disadvantages, especially music. It seems that it's quite easy to score points for the enemy's broken machines (you get so many points how many times the enemy car turned over after the collision) .But since the dash the route does not allow you to clearly see everything, then for the massive collision initiated by you and which affected all the cars, you can get only 10 points. In addition, the game does not have a rear view or at least a mirror that would give you the opportunity in advance to receive a warning about the danger.This does not give the opportunity to arrange accidents in their own scenario.These versions of the game have the same drawbacks and advantages.
‹
›
Home
View web version