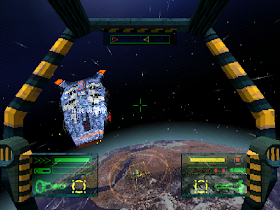 Genre: Simulation
Perspective: 1st-person, Behind view
Vehicular: Space Flight
Setting: Sci-Fi / Futuristic
Published by: Psygnosis
Developed by: Psygnosis Limited
Released: 1998
Platform: PlayStation (PSX, PS1)
It was 100 years after the canonical ending Colony Wars, in which the wormhole, which provided interstellar travel from the solar system, was clogged. Citizens of the Earth Empire were doomed to a slow death from a lack of resources. In the center of the plot is a young pilot of the Imperial Navy Mertens. The game begins with a fight against the small rebels in the solar system, but the forces of the Fleet under the leadership of the talented new commander Krohn manage to break through the blockade, get out of the centenary planetary captivity and fully take revenge on the League of Free Worlds. But is Cron simple?
Continuation of Colony Wars with a banal sequel for the subtitle Vengeance came out exactly one year later and continued the line of the first part. The game took a lot from the original - the plot was still non-linear and to one of several endings the player came as a result of victories and defeats in key missions. However, only one of the endings presupposed the unconditional victory of the Navy. Vengeance remained as complex as its predecessor - the victory of one warrior over squadrons and fleets seemed luck; it was enough to have two stormtroopers on the tail to smash Mertens into chips. The fighters were still provided with all the equipment, but their parameters could be improved with the help of experience points that were given out for successful missions. Also significantly improved graphics - spacecraft have become much more detailed, the beauty of the cosmos was amazing (taking into account the resources of the platform), and the fighter of the player ceased to resemble a piece of coal.
‹
›
Home
View web version