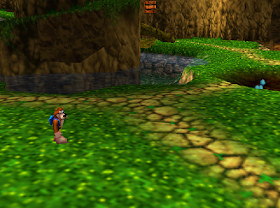 Genre: Action
Perspective: Behind view
Gameplay: Metroidvania, Platform, Puzzle elements
Published by: Nintendo of America Inc.
Developed by: Rare
Released: 2000
Platform: Nintendo 64 (N64)
Continuation of an excellent game from Rare. The story begins two years after the victory over Gruntild. On a dark night, the sister saves Gruntild from the rubble. Now she appears before us in the form of a skeleton, which wants to get a new body with the help of Big-O-Blaster (an adaptation sucking out the vital forces of creatures). From the technical side of the changes a bit - improved already excellent graphics. The plot and corporate humor is again on top. It's very interesting to play.
‹
›
Home
View web version