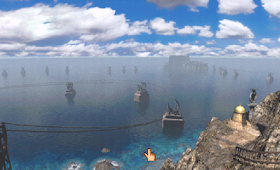 Before swap CD, save state to file, next CD, upload save state file.
Genre: Adventure
Perspective: 1st-person
Gameplay: Puzzle-solving
Setting: Fantasy
Published by: Acclaim Entertainment
Developed by: Cyan Productions
Released: 1997
Platforms: PlayStation (PSX, PS1), SEGA Saturn
Everyone who played in the famous game Myst, on the passage of it asks a completely logical question - "And the continuation will be?" And if possible, something more fun and livelier. Indeed, only very few fans got carried away by this game, although on the PC and Commodore it was a great success. Myst was very often called boring or too quiet, incl. young people, eager for action and adventure, you can say did not accept the game. And only a few of her admirers belonged to the adult generation. But all were unanimous in one - the schedule is modern and excellent. Now came the continuation of this cult game, called Riven The Sequel To Myst. Even at the stage of incomplete readiness the game looks excellent. The plot line looks much more interesting, more intense and captivating. More than three hours of great animation and interaction with many characters and all kinds of creatures. In the game there are literally thousands of images and scenes with which an interactive mode is possible. A completely new world, a new environment, beautifully executed and original. Yes, and sounded the game is also very good. Perhaps the only drawback of the game is that, due to the quality of the executed scenes and a lot of video, you will have to buy as many as 5 discs with the game! But believe me, the game is worth it! Riven is a good test of your ability to observe and find (what you need) in a new amazing and mysterious world. Prepare to enter the world, torn to pieces by endless insoluble conflicts, a world of incomparable beauty, intrigue and betrayal. Riven world!
‹
›
Home
View web version