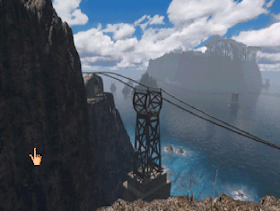 Before swap CD, save state to file, next CD, do not upload save state file, do not restart emulator, the game will continue automatically, save state to file again.
Genre: Adventure
Perspective: 1st-person
Gameplay: Puzzle-solving
Setting: Fantasy
Published by: Tec Toy Indústria de Brinquedos S.A.
Developed by: Cyan Productions
Released: 1998
Platforms: SEGA Saturn, PlayStation (PSX, PS1)
Gameplay in this game is not much at all, and to survey the world of Riven is better than some new and special, non-game order.

Five rocky islands in the middle of a warm blue sea with calm sandy coves, forests full of giant trees, a few slobbery flowers the size of cabbage heads and fabulous glowing mushrooms with a trough, relaxed insects, birds and a local primitive folk, never tired of honoring their ancient gods. So we saw Riven on the early screenshots and in the "deme".
However, in a real game, it immediately becomes clear that all this is just an appearance, a shell under which the real life of Riven hides, life (more precisely, gradual destruction) of machines and mechanisms, steel and stone, from which the world was built by the hand of a mad inventor.
Gloriously look in the sea haze of the island, picturesquely entangled rusty pipes; Among the cheerful foliage and flowers, metal structures are constantly glimpsed; in the mighty trees there are not gnomes, but clanking elevators, and how many more mechanisms and details left from this construction are scattered across the islands!
At first, the semi-industrial-pastoral panoramas of Riven cut the eye, and sometimes even besyat. For example, at the beginning of the game, you have to spend a lot of effort to get into the building through a magnificent "golden" temple with a gigantic, glittering dome.
What is in it? An even more luxurious temple, a palace, or an observatory, at worst?
No! It turns out that this is just a water station with a weave of pipes and iron bridges inside, over a lazily splashing water tank, and the sparkling dome is made of ordinary bricks and is painted with gold paint for quite some time and carelessly.
Such "breakage" in the game can not be counted, and you gradually understand that it could not be otherwise. Riven - not a fairy tale, not a fantasy, it's a living world, a world where everything is natural, logical and beautiful in its own way, and the game itself is more like a scrupulously made documentary film from the life of a distant planet, or, quite the contrary, it's about life the universe, which we all know so well that we have not noticed for a long time.
We all grew up in a dump. Who does not remember the delightful wastelands with piles of construction debris, abandoned substations, mounds with mysterious iron doors! This universe was not a dead world of human garbage. She lived her mysterious life. Lonely emitting a steam pipe in the middle of a wasteland, a ray of light from a hole in the asphalt of the yard, a rusty cart on the pile of soil that had taken over the night from nowhere, an old refrigerator that had grown into the ground in the forest wilderness-all this hinted at a certain special life inaccessible to us.
Probably, it is this, the independent existence of objects thrown by man once so fascinated the creators of Riven, that they did not regret four years of hard work, creating a world in which all the laws of reality turned upside down - the very nature in it was the result and consequence human labor, and the work of an old and many years ago abandoned. And this world, like the world of any city wasteland, is full of the peculiar charm of decay and destruction and is reflected in the game with amazing logic and naturalness.
If there is a working mechanism, there is necessarily a source of energy for it; If you see stumps, it means that there will be signs of logs somewhere; if in an unattainable height some signs of human activity are visible, then there must be a way there; if you climbed to the top of the mountain, be sure - you will immediately be shown a dazzling view that opens from this point; if you stumble upon a hatch that no one has opened for many decades - it will be rusty, the old tree of the footbridge is whitewashed, the stone of the caves is weathered.

The life of things and substances is the most important thing in Riven. Trees, insects, grass, animals, people - these are only pitiful additions to the stone, water and iron, of which this world consists. The number of textures and forms of "inanimate" nature in Riven'e has no analogues in the computer world. And if you add here the reaction of these very textures to different lighting conditions ... Here the cave is lit by blue light, here is red, here is a stone in a bright sun, here in a deep shadow. Here is a rusty hatch, here with stains of rust, that's just darkened by the time - options and nuances can not be counted.
No, all these beauties pale before that truly maniacal thoroughness, with which in Riven'e water is depicted! It seems that there is not one of its natural state, past which the authors of the game would have passed. The water is deep and shallow, standing and flowing, smooth and exciting, plus, of course, all the effects of transparency, illumination and reflections that can only arise in this water. Entire episodes of the game were created for the sole purpose - to show "new" water.
... With which the creators of Riven slightly outsmarted. Because the water in the game is absolutely "scientific, correct" water, it looks quite unnatural. Probably, in reality we just do not notice all the nuances of the water movement, and reproduced on the computer screen, they leave a feeling of some fussiness and unnecessary gleams.
No matter how large the world of the game - as many as 5 CDs, all the same, there was not enough room for Cyanov to experiment with textures and substances! In the laboratory you will find an amusing, though utterly useless, thing - a burner connected to a balloon filled with transparent gas. I wonder how much time the authors had to work to show with such unthinkable accuracy the subtle changes in the refraction of light in a heating gas? People really worked for their own pleasure!

The man was forgotten!

Yes, for the sake of our own, and not our gaming fun, the creators of Riven were entertained with their geological and optical "toys." The result - the game is very inconvenient for the "spectator". In Riven there is no smooth movement between lockshenami, nor a circular review. Instead of the joys of technological progress - all the same, memorable to us from a long time, badly docked slides. In tunnels and caves it is almost not noticeable, but half of the charm of marine species is lost from the unpleasantly clumsy transitions between the pictures. Even pretty animation, "built-in" in a good half of frames, does not save: flying birds, creeping insects, occasionally human beings and, of course, moving water is a sea of ​​water (sometimes literally)!
Especially wildly (for the modern game) look like a pen-cursor moving from the "Mist" and a file saving system, which must be extracted from the screened crown with random mouse clicks. The problems of our convenience with you were clearly of the last interest.

Slice of the game

However, sometimes developers still remember that the viewer of all this splendor is supposed to also interact interactively. To begin with, you are rolled over the sea on a cable car. Although in this cartoon the resolution is greatly reduced, the effect of rapid movement is simply stunning! It is worth to look at the ropes, on which the cabin slides - they strangely convey its heaviness and uneven movement. Such entertainment in the game will be plenty: you are waiting for travel through the tunnels (on the trolley) and the underwater railway (in the bathyscaphe).
But not this, of course, I want hardened lovers of puzzles! Well, you do not have to worry: puzzles will also be in the game, only for the most part already at the very end. To master almost entirely the four islands of the five can be quite witty, without straining: so, turn the lever, click on the button ... But by the end the whole world of Riven is transformed into one giant puzzle, and if you have something not considered, missed , not noticed, or, more than that, just forgotten, you will have to wander again through the caves, pendant bridges and iron stairs of Riven's islands.
So get out the pen and paper and do not take a single step without the entries: symbols, sounds, rock carvings, the color of the lamps - everything will be useful for solving the main problem! And here's the long-awaited new one! On each of the islands you need to remember the geographical position of a certain structure - the "rotating dome", and then reproduce it on a rather detailed grid. Oh, and they love their islands! And you will be forced - if not to love, then at least to capture them in your memory until the last pebble.
Closer to the final in the game there are hints on the plot: as usual, they are contained in manuscript books and (about the triumph of progress!) Long video clips, which there is no way to interrupt. But this is the most high-quality computer video that I had to see, and the actors are not bad, and Rend Miller himself is playing the inventor of Artus, who sends us to look for his wife Katerina!
And yet, the end of the game, I confess, disappointed me a little. Well, we saved Katerina, locked her in the book-prison of the crazy creator Riven, but the islands died, and it's insulting. In the end, we did not see the unfortunate Caterina before the final video clip, and with the islands one way or another had to get used to - and now they fly literally into the tartar!
They are greedy, these guys from Syan, well, they should have given us to manage this with an exceptionally logical and original arrangement of the world, and how many things could have been done with it, give us its creators to really take advantage of at least some possibilities management and control in the wonderful world of Riven, instead of wandering around him with almost passive observers. Maybe next time, in another world?
‹
›
Home
View web version