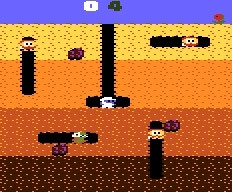 Genre: Action
Perspective: Side view
Visual: Fixed / Flip-screen
Gameplay: Arcade
Published by: Atari Corporation
Developed by: Namco Limited
Released: 1987
Platforms: Atari 7800, Nintendo (NES)
Quite an entertaining and famous game, a port from arcade machines. Dug Dug, a guy who looks like an astronaut with a hand pump, digs tunnels under the ground. He needs to deal with the underground inhabitants threatening his flowers - the deadly Pooka and the fire-breathing Fygar. He can inflate and blow up these creatures, and can throw stones at them, which is doubly dangerous, but gives more points. So we're playing! Ported from the same name arcade game from Namco, released in 1982.
Atari 7800: This is one of the best versions of the unfading arcade hit. The gameplay in Dig Dug is perfectly balanced, done faster, and monsters from the very beginning behave aggressively enough. The playing field is slightly trimmed left and right, as in the arcade version, so that the places where it will turn out to be smaller. The music is on the level. Of course, the version for the Atari 7800 does not reach the arcade quality, but you can play and play!
Curiously, Dig Dug created in 1984, and she saw the light a few years later.
‹
›
Home
View web version