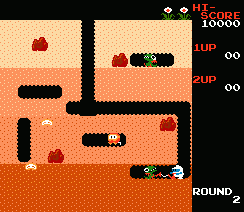 Genre: Action
Perspective: Side view
Visual: Fixed / Flip-screen
Gameplay: Arcade
Published by: Namco Limited
Developed by: Namco Limited
Released: 1985
Platforms: Nintendo (NES), Atari 7800
A fairly successful variation on the famous "Digger".
You kind of like a scuba diver, for some reason trying to undermine and bring down into the water an island, though inhabited by strange creatures, but on which grow wonderful vegetables. However, we will return to the vegetables.
The aborigines of the island and its submarine-underground world are clearly unhappy with your idea and in every possible way they are hindering you. But you continue to dig, and you approach the inhabitants of the island approaching you, in a literal sense, first to the state of bloatedness, and then - to bursting. And so, until there will be neither an island nor its inhabitants.

Any button (press and hold) - inflate the enemy to the state of the ball, and then burst it.

If you dump two stones, a vegetable will appear, for the capture of which you will get a good extra points.
Level select: Wait until the title screen stops moving, then type A + Select + Start.
‹
›
Home
View web version